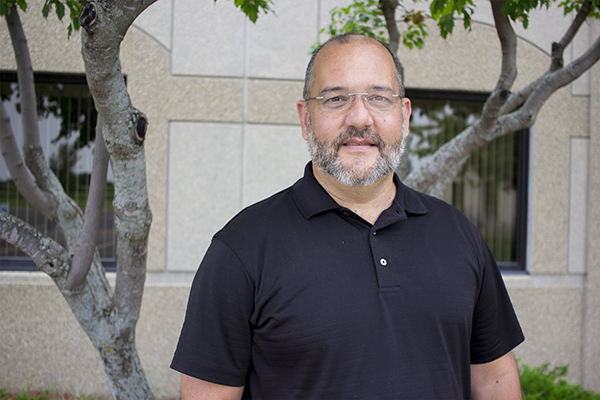 James Petersen, formerly a senior pastor at Crossroads Church in Albert Lea, will be working with ReachGlobal as the executive director of global ministries. -Hannah Dillon/Albert Lea Tribune

Change can seem like jumping into the unknown, but one Albert Lean has embraced it.

James Petersen was a senior pastor at Crossroads Church in Albert Lea for four years for a total of 25 years as a pastor.

Now, Petersen works as executive director of global ministries for ReachGlobal, which focuses on mission trips and international ministries.

Petersen said his focus with his new job, which he started today, will be leadership development, support and equipping and empowering missionaries and leaders all over the world. Per year, Petersen will travel about 200,000 miles around the globe.

ReachGlobal is associated with the Evangelical Free Church of America, and Pedersen said the company contacted him to see if he would consider the position.

The job was attractive to him because it allowed him to stay in Albert Lea as well as continue to be connected to Crossroads Church. Though Petersen will not be a pastor at Crossroads anymore, he and his wife, Jennifer, will remain members.

Sometime in September, Petersen will travel to Tanzania and Belgium. No language-learning is necessary to prepare for his travels as he will be working with English-speaking leaders and missionaries, but Petersen said he has been brushing up on African history and information before he travels there.

While Petersen has been to many countries around the world — including Israel, parts of Europe and the Mediterranean — he hasn’t been to many of the countries he is going to be working in.

Another part of the preparation for his travels is learning about all the organizations he will be working with. ReachGlobal partners with a number of missionary organizations across the world, Petersen said.

“I have a lot of learning to do the first year,” Petersen said.

In addition to all of his other reading, Petersen said he has been keeping up with current literature on leadership.

Petersen signed the contract for his new job in late July and informed his Crossroads congregation in early August.

“It was a really tough decision to make,” he said.

While his children are all grown, Petersen said they are excited for him to have the opportunity.

However, he said it’s going to be a difficult transition from being a pastor to not being one.

While there is a lot of unknown, Petersen said he believes he is going on the right path.

“God asked us to get out of the boat, to do something different,” he said. “I’ll enjoy the fact that after being on the road I’ll be able to come back to Albert Lea.”

Interesting fact: Petersen was a pastor to a U.S. senator and preached to a first lady while in Sioux Falls, South Dakota.