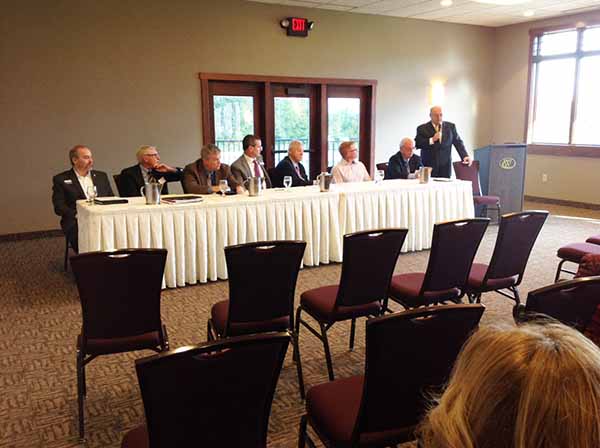 “We’ve got spirit. Yes, we do. We’ve got spirit. How about you?” According to a press release, many graduates of Albert Lea Area Schools recognize that cheer. Members of the fifth annual public forum of the Albert Lea Education Foundation exemplified that sense of positive spirit and pride for Albert Lea as they tackled the challenges related to this year’s theme, “Building Bridges between Albert Lea Business, Education and Student Communities.”

Panel members focused on the efforts currently being made to establish mentorships, internships and scholarships to help students find a career path that would lead to a highly skilled job in the Albert Lea area and beyond.

The focus of the panel members’ concern was the high number of high skilled jobs available in the Albert Lea area versus the number of residents able to fill them, both today and in the next five to 10 years. Despite this availability of jobs which do not require a four-year college education, most high school graduates perceive that they need to go to a four-year college in order to find a great job and that they also should not want to return to Albert Lea for their working adult life.

Audience members heard every panel member discuss their current efforts to offer robust internships and the challenges related to trying to include high school students in their workplaces due to privacy laws or their businesses’ workplace insurance concerns, etc. Panel members discussed current plans in place to offer scholarships specifically geared to students going into skilled worker programs such as those offered in many Riverland Community College programs.

Sid Verdoorn talked about the need to “show kids what they can do with their hands.” He talked about the need to get school leaders and teachers visiting industries such as Caterpillar or John Deere and then to teach their students to work with their hands. In his estimation, probably 40 percent of the kids now in college should be in some other kind of training requiring less than a four-year degree.

Mike Funk said the challenge is that 95-100 percent of parents perceive their kids should go to a four-year college even knowing that statistically many who start college will not complete it or will complete a bachelor’s degree, but have no saleable skill. Other school officials said they have been working diligently locally to find out what skills the local businesses need and now are trying to determine what Albert Lea High School can do to meet those needs. This year there are students in youth apprenticeship programs at several businesses in Albert Lea, a mentorship class has been restarted at ALHS as has a work experience class.

Matt Bissonette said Riverland is focused on trying to make the post-graduation education connection between high schools and businesses’ highly skills jobs, but jobs that don’t require four year degrees. He mentioned the collaboration of Perkins staff and WDI at Riverland with apprenticeship programs, and the work with Mayo to establish an LPN/CNA task force to solve the looming huge shortage in that area.

John Morrison said that Albert Lea is in his blood and described his family’s history living in the Albert Lea area. He spoke passionately about how one particular teacher at Albert Lea High School had encouraged him and given him the principles with which to be successful. Besides giving him confidence in himself, she also encouraged him to focus his life’s work on learning to “fix things” no matter what line of work he went into. His suggestion was that the schools and community work together to develop a plan of action. Once a work plan has been approved, Morrison committed financial resources to fund one full time position to work the plan, reporting regularly to leaders of the participating entities in Albert Lea, and then returning to the forum next year to report on the tangible results. These may include increased student post-high school graduation enrollment in programs leading to highly skilled positions (not four-year degrees), in increased high school students in mentoring and internship programs and increased opportunity for local ALHS graduates to become community leaders for the next generation.

Panel members were quick to support Morrison’s proposal and offered the participation and assistance of ALEDA and the chamber. Potential new businesses as well as those already here would love to know they have a good skilled workforce available to handle the skills their industries need. Dr. Ciota encouraged everyone to think about starting working closely with students and parents even before ninth grade.  Al Arends described Albert Lea grads who have stayed in town and worked successfully in his company and how a local committee  is working to link people, businesses, and potential residents with “Excite Albert Lea.”

Sid Verdoorn suggested that within this potential new work there be included efforts to teach students about entrepreneurship and personal as well as business finances. One goal is to give more students inspiration and direction to seek the education in the high level skills being eagerly sought and needed to have a good life and stay in the Albert Lea area.

According to a press release, panel members and members of the audience agreed — Albert Lea is a great community to live in and to work in. Working together as a community, 40-plus people participating in this year’s forum agreed that more people need to hear this message and become involved in creating internships, mentorships and scholarships for Albert Lea students.  Plenty of Albert Lea spirit and can do attitude can indeed create an inspired future for our current students and future workers and leaders.