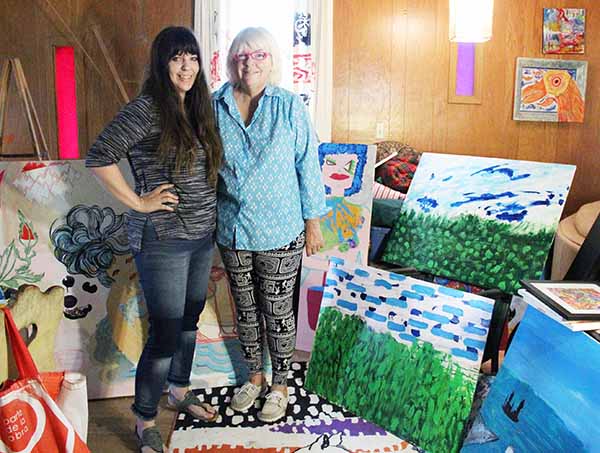 Rachel Bailey Collier and her mother, Carli Marticia Bailey, stand with some of their art that will be on display at the Albert Lea Art Center. – Sarah Stultz/Albert Lea Tribune

Four generations of art will be on display at the Albert Lea Art Center’s newest exhibit.

Called “Our Mothers and Daughters: Four Generations of Artwork,” the exhibit opened Sunday and runs through Oct. 17.

According to the artist statement for the show, the women make art all of the time. 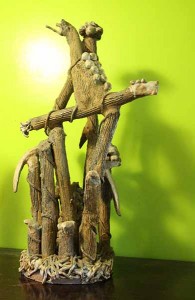 This piece is from the Untitled Cornstalk Series by Marticia Davis Bailey. – Sarah Stultz/Albert Lea Tribune

“It’s an extension of our being,” they wrote. “The women in our family paint, sculpt, draw, collage, mosaic, film, photograph and make music the way other people keep house and visit with each other.”

They said creativity and self expression are values that are central to their family.

“We’re not afraid to express artistically and verbally with ourselves and each other,” they said.

Carli Bailey said she graduated from Albert Lea  High School and then lived in the Twin Cities, northern California and Peoria, Illinois, before she moved back to the city about eight years ago to take care of her mother. Her mother died, but she remained in Albert Lea. She described her work as intuitive, meaning her paintings are a projection of how she feels.

Collier lives in the Twin Cities and works for an ad agency. She said she is focused on painting, printmaking and video art. She wants to be a filmmaker and has a bachelor’s degree in fine arts from the School of the Art Institute in Chicago.

Carli Bailey said her mother, Marticia Bailey, and her grandmother, Davis, had their master’s degree in art and were her teachers in art. Growing up, they attended many museums together and studied other artists.

Davis painted like the old masters,” her family said, while Marticia Bailey embraced more of an abstract aesthetic. Carli Bailey, and her daughter, also describe themselves as contemporary.

The women said it only seemed natural to have all of their art in the show together. There will be at least 30 pieces of art on display, most of which are a large and were painted with acrylic or watercolor.

Collier said though she only lived in Albert Lea until she was 8, she thinks of the city as a place she can come back to for creating art and reflecting on life. She also remembers visiting her family there.

“We’ve always been sort of nomadic people and travelers,” she said. “Having this base and having this home has really been an important stability in our creative endeavors.”

She said she has lived in a lot of places all over the country, but the older she gets, the more she appreciates Albert Lea and her mother’s home as an oasis. She said she is inspired by the landscape and the country.

The Art Center is open from 10 a.m. to 2 p.m. Tuesdays through Saturdays. Admission is free.

The open house for the show will be from 5 to 7 p.m. Thursday.