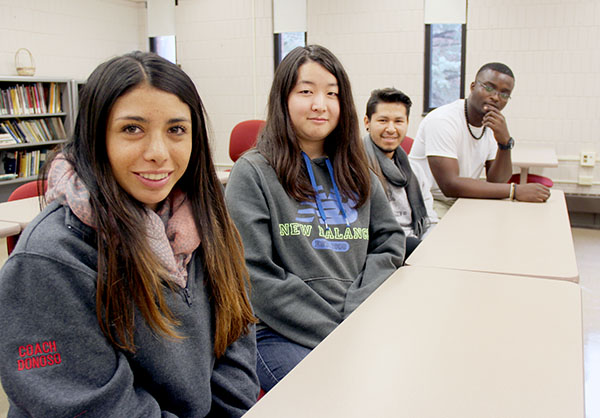 AUSTIN — When Colombia native Nicole Donoso was in high school in her native country, she decided she wanted to learn English.

Looking through the foreign exchange programs available in the United States, she came across an opportunity at Pacelli High School in Austin. She started there in 2013 and graduated later that year.

Donoso said while she knew the basics of English when she came to this country, she learned more about reading and speaking the language from her host family. After high school graduation, her host family encouraged her to stay and attend Riverland Community College to continue her education.

She is one of several international students who have come to Riverland to take intensive English as a second language courses and then to move on to achieve their diplomas from the college.

Donoso said she plans to earn her liberal arts degree from Riverland and then go on to Minnesota State University, Mankato, or the University of Minnesota. Her dream job is to work for the United Nations, she said.

“Here I met people who encouraged me to do things,” she said of attending Riverland. She noted she would recommend the ESL program to others.

James Douglass, executive director of communications with Riverland Community College, said 17 percent of the college’s students are students of color.

She said the program teaches more than the basics; it teaches the students to acquire academic English skills, with a focus on reading, writing and vocabulary acquisition. It goes beyond life skills into getting the students ready for future courses at the college level.

“We’re constantly changing to meet the needs of the students,” Christopherson said.

Many of the students were well-educated from their own countries and are looking to find good-paying, high-skilled jobs. Knowing English will help with that goal.

Amoe Sato said she attended college in Japan, but there weren’t any majors there that she was interested in. She also wanted to learn English, so she came to Riverland in 2013.

Riverland was attractive to her because it has dorms in Austin and offers international students in-state tuition.

Her first semester, she took ESL courses and has since been working toward her bachelor’s in nursing. She hasn’t thought about what she wants to do next.

She said her teachers have been very supportive and described the classes she has taken as being “good-quality classes.”

She is a tutor at the college’s writing center.

Jarol Santillan is a native of Peru and is commuting from Albert Lea to classes at Riverland’s Austin campus. He said he has been living in Albert Lea for two years and is also working at the Austin Public Library.

Prior to coming to the area with his mother and brother, he had almost two years at a university in his country with coursework in accounting and theology.

At Riverland, he is taking business courses and eventually wants to go to a university in California.

Santillan said he thinks being able to speak Spanish and English will help him get a job in the future.

Ghyslain Sossoukpe, a native French speaker, came to Riverland with a little bit of a different history.

He is from West Africa and came to the area after his brother moved to Austin.

Sossoukpe said he was attending a university in his home country for computer technology and that is what he is working toward at Riverland as well.

“It’s my first experience in USA,” he said. “I will never forget Riverland because the teachers everytime help you with whatever you want.”

When he first started at Riverland, he said he couldn’t speak three English sentences at a time. That has since expanded.

He noted there are about 100 other people from his country who also moved to Austin. He said they are coming for the jobs and the education. They send money back to their families.