Interns at The Rock hail from Switzerland and Germany 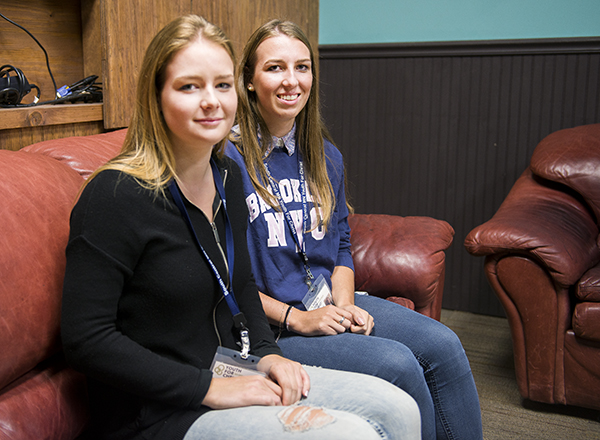 Jenna Lotterer, right, and Salome Wohler are staying with Pat and Bob Goldman during their time in Albert Lea. Lotterer is orginally from Germany and Wohler is from Switzerland. – Colleen Harrison/Albert Lea Tribune

Youth for Christ’s The Rock has hosted international interns for 15 years, and this year is no different.

Jenna Lotterer and Salome Wohler are the newest interns at the organization’s drop-in center — a place students can go after school to have a place to be until 5:30 p.m. when the center closes — and both arrived in the area Sept. 1.

They work at The Rock Monday through Friday, helping with office work, the kids club and campus life at Albert Lea High School, they said.

Lotterer, 19, is originally from Hessigheim, Germany. She’ll be in Albert Lea through August 2016.

Wohler, 18, is originally from Zurich, Switzerland, and will be in Albert Lea until the end of February 2016.

Both interns are staying with Bob and Pat Goldman of Albert Lea, who they said are a “really nice host family.” Host families aren’t the only thing the two have in common.

Both are avid soccer players, and said they’ve been teaching some of the children that come through the center how to play. They both come from families where they have an older brother and a younger sister, as well. The two also enjoy singing along to music in the car together, and both of them play guitar.

Wohler and Lotterer both said that in Europe it’s common to take a year off in-between finishing high school and starting at a university. Both are interested in pursuing secondary education. Lotterer isn’t sure what field she’d like to pursue quite yet, but Wohler said she has been leaning toward going into social work.

“I think I have a passion for that,” she said.

Both of the young women said the internship interested them as a way to strengthen their faith.

“We’ve decided to serve God and do something different,” Wohler said.

The two said they enjoy Albert Lea and how scenic it is, and both enjoy spending time by the different lakes. Neither one has felt homesick yet, but Wohler did say that she misses Swiss chocolate.

Some of the biggest cultural differences they’ve both noticed have centered around food.

“There’s so many choices for everything,” Wohler said.

Both said that dessert being served right after a meal is a different concept for them. In Europe, there’s typically coffee served in-between a meal and the dessert course, or there’s at least some kind of a break in-between the two. Lotterer said the coffee in Germany is much stronger, and that it’s something she misses. Water always being served with ice cubes in it is a weird notion to them, as well.

Wohler and Lotterer both come from places where public transit is used much more than cars and other individual vehicles, so driving everywhere has been an experience for them. They also said there’s much more censorship here in the U.S., both in the mainstream media and when talking to others.

A better and more fluent understanding of English is something both hope to accomplish during their time in the U.S., even though both keep up in conversation pretty well already. Wohler already knows French and Italian, while Lotterer speaks Spanish — on top of their respective home country languages of Swedish and German.

The two hope to visit other parts of the country while they’re in the U.S., and said they’re already planning trips to Chicago and New York.

Both Wohler and Lotterer said they hope to learn and experience as much as possible during their time here.

“We want to grow in our faith, and learn to trust God,” said Wohler.

Family: mother and father, and older brother and a younger sister

Livelihood: Intern at Youth for Christ’s The Rock

Interesting fact: Ears gross her out.

Family: mother and father, and older brother and a younger sister

Livelihood: Intern at Youth for Christ’s The Rock

Interesting fact: Feet gross her out.