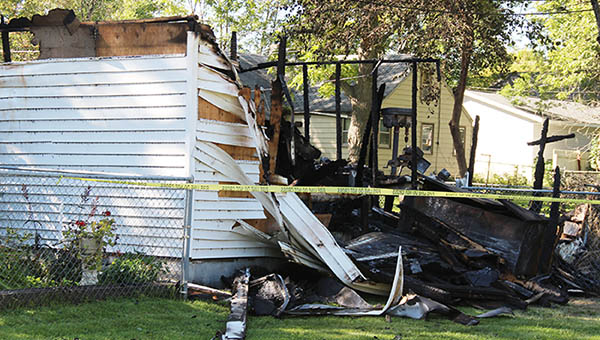 A garage at 206 Fenton Ave. is a total loss after a fire early Sunday morning. Sarah Stultz/Albert Lea Tribune

Fire department has not released cause of blaze

A garage was a total loss and siding on a neighboring residence was damaged from a fire early Sunday morning in eastern Albert Lea.

The unattached garage in the back yard was fully engulfed in flames when firefighters arrived at the scene.

The family was home at the time, but no injuries were reported, according a Fire Department spokesman.

Firefighters extinguished the fire in about 30 minutes with the assistance of Albert Lea police officers and Gold Cross Ambulance.

Two cars in the backyard received minor damage, along with siding on the back side of the Fenton Avenue home.

A neighboring garage at 1915 Bimelich Lane, directly east of the destroyed garage, also sustained siding damage from the heat of the fire. The cost of the damage hasn’t been estimated.

Firefighters cleared from the scene at 3:39 a.m. They expect to be back at the site today for further investigation.

The cause of the fire has not yet been announced. Look to the Tribune for more information as it becomes available.