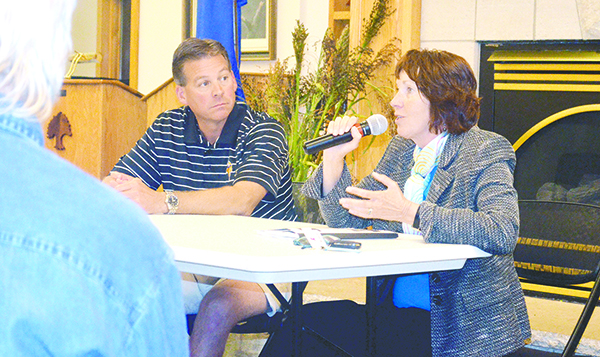 AUSTIN — Local Izaak Walton League members weren’t pleased with state legislators after the 2015 legislative session, but Sen. Dan Sparks and Rep. Jeanne Poppe, DFL-Austin, hope people walked away from a public forum Monday with a better understanding of how the political process works.

About 20 people voiced their concerns about the Minnesota Legislature’s decision to do away with an environmental citizens board and reduced water quality rules for commercial operations in northern Minnesota, among other issues.

“We didn’t see a lot of speaking up and support for the boards,” Jim Stiles said. “That’s what we wanted to know.”

The 2015 Minnesota legislative session ended with a special session to pass an education bill, as well as a lights-on transportation bill among other things.

Yet the legislature’s agriculture bill became controversial after House Republicans inserted proposals to disband the Minnesota Pollution Control Agency’s citizens board, along with the decision to exclude portions of northern Minnesota from upcoming water quality standards.

Several people took the legislators to task for approving the ag bill, which also included Dayton’s proposal to provide a 50-foot buffer strip of land along the state’s waterways.

Yet Poppe and Sparks explained they voted for the bill not only to ensure Dayton’s buffer strips but to prevent House Republicans from repealing further environmental standards. According to Sparks, House Republicans were willing to stand firm over the citizens board as well as other issues concerning mining in the northern part of the state.

“If we would’ve went into a government shutdown over that one concern, I think we’d be talking about other issues here today,” Sparks said.

Both lawmakers said they would support an executive order by Dayton to restore the citizens board, but Poppe believes any future board should also include an agricultural specialist to give perspective on ag industry issues, as well as to prevent the citizens board being perceived as anti-agriculture.

“There has to be some changes made for who’s on the board,” Poppe said.

Yet some farmers hope legislators reexamine buffer strips at the next legislative session after federal subsidies for buffer strips could disappear for farmers.

An area farmer from Red Rock Township who refused to be named told legislators the 100-foot buffers he had along a two-mile stretch of Dobbins Creek weren’t going to be subsidized by federal funding after Minnesota passed buffer strip regulations.

That farmer gets about $100 per acre each year for 13 acres of buffer land, but he was told the subsidy would no longer be in effect now that Minnesota made buffer strips mandatory.

“I’ll have to pay my taxes on my own like it’s agricultural land,” he told legislators.

Sparks and Poppe agreed to look into the issue as more farmers would presumably raise similar concerns over grassland property.

Despite the concerns, both lawmakers said they were glad to hear from residents as well as give advice on how Izaak Walton League members could approach the next legislative session.