Funeral Services for Lee Junior Johnson, 91, of  Ellendale will be at 2 p.m. Tuesday at First Lutheran Church in Ellendale. The Rev. Richard Sliper will officiate. Interment will be in First Lutheran Cemetery. Military honors will be accorded by Ellendale veteran’s organizations.  Friends may visit with family from 4 to 8 p.m. Monday at Bonnerup Funeral Service in Ellendale and one hour before the service at the church. 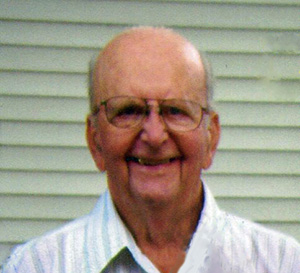 He attended school and as a young man he began farming. When it was war time, he proudly served his country in the United States Army Air Corps. When he returned from the war, Junior returned to farming and then worked as a buttermaker in Glenville, Madison Lake, Freeborn,  Bixby  and at Ellendale Creamery. Lee received certification in refrigeration and also obtained his boilers license, working for EF Johnson for eight years before retiring in 1987.

Lee enjoyed dancing, traveling — especially to California and Colorado — gardening  working on small motors and going to the casino. He made wine — grape and cherry were among his specialties ­— that he took to the Steele County Fair for competition.

He was honored by the invitation to participate in the Honor Flight on April 11, 2015.

Lee loved to visit and bring people together. His always sunny disposition had a very positive and inspirational impact on the lives of many.