Memorial services for Marian M. Liska of Albert Lea will be at 11 a.m. Tuesday at Bonnerup Funeral Service in Albert Lea. The Rev. Russell Scepaniak will officiate. Friends may greet the family from 4 to 7 p.m. Monday and one hour prior to the service on Tuesday. Private Interment will be in St Theodore Catholic Cemetery. 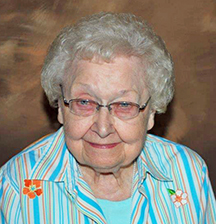 Marian died Wednesday, Sept. 23, 2015, at the Thorne Crest Senior Living Community in Albert Lea. She was 88 years of age.

Marian was born Dec. 2, 1926 in Garner, Iowa, the daughter of Anton and Albina (Ptacek) Urich. She graduated Garner-Hayfield High School in Iowa and Community College in Mason City. Marian was united in marriage to Leo G. Liska on April 16, 1947 in Duncan, Iowa. Together they made their home in Albert Lea.

Marian had been employed for many years at the Wilson Co. in Albert Lea and at the Albert Lea Family Y. She was a lifelong member of St Theodore Catholic Church and was active in the CCW. Marian enjoyed watching birds, following the Minnesota Twins, but most importantly spending time with the family.

She was preceded in death by her parents; husband, Leo; daughter, Susan Hackert and brother Clement (Angeline) Urich.

Special thanks to the nurses and staff at Thorne Crest Senior Living Community for their care and compassion during Marian’s stay.