Nancy Irene (Folkestad) Moreton was born in Albert Lea on July 28, 1938, to Norwegian-American parents. She graduated from Albert Lea High School in 1956, among a group of fun, tight-knit friends. During high school, she was a majorette in the marching band and active in choir and madrigals. 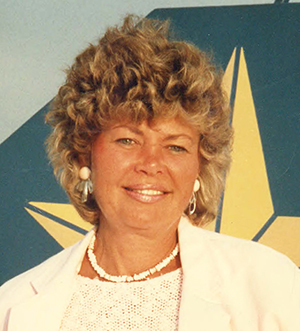 She enjoyed music and song her entire life. Nancy attended the University of Minnesota for a short time, before packing up a small suitcase and moving to the big city of Chicago in 1959. There she met many lasting friends and her future husband, Harry Moreton. While in Chicago she worked as a sales secretary at United Airlines. Job perks included frequent travel abroad, which she enjoyed immensely — and travel remained a passion throughout her adult life.

In 1969, she moved with her new family  — husband Harry and three small children —rom LaGrange, Illinois, into a house Harry built — over many weekends — in West Chicago. She raised her children there, was active in the Parent Teacher Organization and expertly entertained many family and friends in these years. Nancy was an excellent cook and knew how to throw a memorable party. When her children were older she opened and ran a tearoom and gift shop in Warrenville called the Little Red Schoolhouse. She lived in West Chicago for almost thirty years before moving to the Wheaton area.

In January 2013, Nancy was diagnosed with Stage IV lung cancer. She entered the excellent care of Angels Grace Hospice, which greatly improved the quality and length of her life. She passed away Saturday, September 26, 2015, at Meadowbrook Manor in Naperville, Illinois, where she had lived since 2005. Her daughter Julie at her bedside at the time of her passing.

Nancy was a warm, witty, and fun-loving person, a loyal, caring and thoughtful friend and loving parent who adored her children. She will be missed. She suffered greatly in the last years of her life and is now at peace.

She is preceded in death by her sister, Lucy; and parents Omer and Irene Folkestad of Albert Lea.

She is survived by her son, Chris; daughters Julie and Melissa; and two granddaughters, Aurelia and Flora.

Funeral service will be at 11 a.m. Saturday at Williams-Kampp Funeral Home 430 E. Roosevelt Road in Wheaton.