Orville David Petersen, 93, of Albert Lea died on Wednesday, Sept. 9, 2015, at St. Marys Hospital in Rochester surrounded by three generations of family. Visitation for Orville will be from 4 to 7 p.m. Friday at Bayview/Freeborn Funeral Home and one hour prior to the service at the church. The celebration of his life will be at 1:30 p.m. Saturday at Bridge Community Church North, previously known as Calvary Baptist Church. The Rev. Clayton Balsley will officiate and Veterans of Foreign Wars and American Legion honor guard will accord military honors. Online condolences are welcome at www.bayviewfuneral.com. 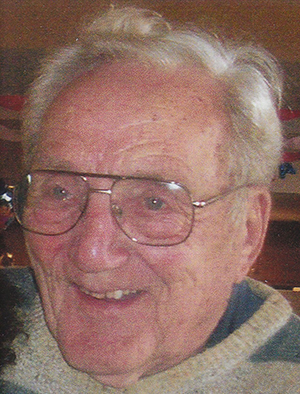 Orville David Petersen was born on July 30, 1922, in Clarks Grove, the son of David and Grace Marie (Christopherson) Petersen. He grew up and went to school in Albert Lea and his childhood friendships endured throughout his life. Orville served in the Army during World War II and attended Dunwoody Institute for Refrigeration.  On Dec. 9, 1950, he was united in marriage to Dorothy K. Klaven at East Freeborn Lutheran Church. Orville was a member of Calvary Baptist Church, a lifetime member of the VFW and American Legion, and was a member of the Fountain Lake Sportsman’s Club. He worked at Scottsman (Queen Stoves) for 35 1/2 years in various positions. He enjoyed gardening, woodworking, camping, fishing and traveling. Orville’s grandchildren loved going for walks with grandpa, visiting parks and listening to stories about his experience sailing around the world during World War II.

In lieu of flowers, memorials are preferred to the American Legion of Albert Lea.