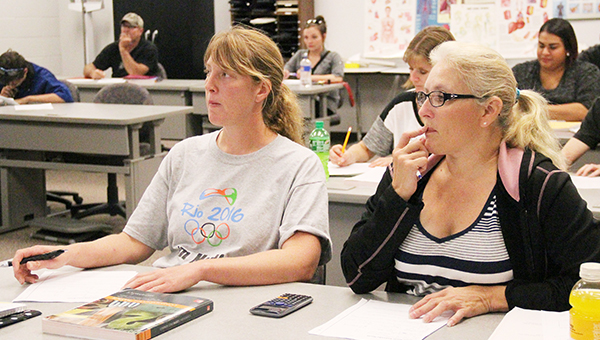 Riverland Community College students take part in a basic math course on Wednesday at the college. The college and Adult Basic Education are collaborating to help students who need a refresher in math. – Sarah Stultz/Albert Lea Tribune

Class gives students the chance to brush up on math knowledge

Riverland students looking to brush up on their math, or who have been away from the subject for a while, can sign up for a basic math class through the college that is taught by an ABE instructor. Though the class does not count for credit, it is offered for free.

Jahnke said students register for the course through the college. 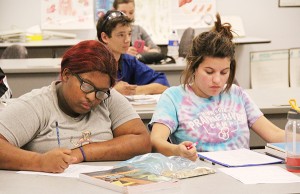 “We need to continue to expand our partnership with Riverland to figure out how we can go further with our relationship,” Jahnke said.

She said it will actually be a federal government mandate in the near future, requiring Adult Basic Education, Workforce Development and local colleges to come up with a plan to address adult learners.

“How are we going to meet the adult learners so they can successfully transition from the community college or to work?” Jahnke said.

Dathen Johnson, who is in his second semester at Riverland as a theater major, said he needed to freshen up on his math skills in the class and has enjoyed it so far. The class meets two times a week, and it will ultimately help him on his goal to attend either the University of Minnesota or Mankato State University.

Johnson, of Albert Lea, ultimately wants to obtain his bachelor’s degree in journalism. 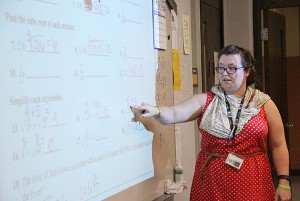 Student Cory Bennett, who is in his first semester at Riverland after completing some college courses several years ago, said he ultimately wants to be an elementary school teacher.

Bennett, of Albert Lea, said his tests were lower than average, so his counselor suggested the basic math course.

He said anyone complaining about the cost of college should consider schooling at community college. Between financial aid programs and state grants, he is getting his entire college paid for.

Ashonte Cofield of Albert Lea said she is going to Riverland for human services. She hopes to get her associate’s degree in social work.

Cofield is also in the basic math course. She’s  said the class has been helpful for her because it goes over information in multiple learning styles.

“It’s a review, and it’s fun because you get to re-learn what you already learned,” Cofield said.

She hopes some of the tricks she has learned for math will help her down the road.