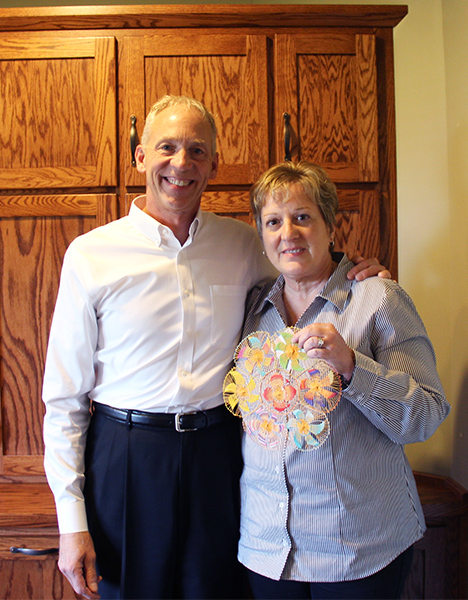 Steve and Kim Zenk last month took part in a mission trip to Paraguay. Kim is shown holding a nanduti, an authentic, handmade lace given to each volunteer on the trip. – Sam Wilmes/Albert Lea Tribune

Husband and wife Steve and Kim Zenk, along with other volunteers, flew to Paraguay, a central South American country, on a Habitat for Humanity service mission.

“We loved it,” said Steve Zenk, financial adviser at Thrivent Financial in Albert Lea. “There’s something about the deep friendships we made during the trip. We laughed and teased each other throughout the week, and sometimes we even cried together.”

The trip, part of a partnership between Thrivent Financial and Habitat for Humanity, lasted from Aug. 21 to 31. 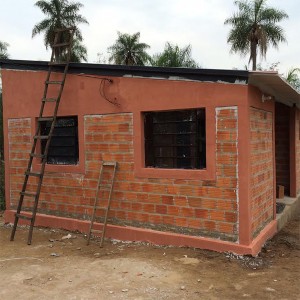 The Zenks said on the trip, their days began at 6 a.m. An opening prayer was read. The couple would then take an approximately hour-long bus ride from their hotel in Tobati to their worksite in Arroyos y Esteros that gave them the chance to see the countryside.

“It was fun riding that bus,” Kim Zenk said. “One morning we saw several men hitching up their oxen. It wasn’t something you see every day.”

The Zenks would then walk a considerable distance from the bus to their worksite where they would work for the morning.

They were on the job site for four days. The rest of the trip consisted of cultural exchanges and re-entry classes.

Twelve other Thrivent Financial representatives attended the trip led by Thrivent Financial senior leaders. Thrivent has committed to building six homes for the local population. The group finished two homes and worked on three other ones.

Steve Zenk stressed that they wanted their Christian faith to be seen in action.

“This was a way we could put our faith in action,” he said. “We could walk the walk. We could demonstrate love.”

The volunteers hand-dug the footings and the septic systems onto the houses. The volunteers also painted the homes and conducted brick work. There were a combined 26 volunteers working at the homes that were in differing stages of construction. A different mission group belonging to Thrivent began construction on the homes in June.

The last day the volunteers were on-site, the homes were designated for families. Habitat for Humanity International officials came and spoke at the sites. All of the volunteers, neighbors and dignitaries touched the newly built homes and prayed for the families who would soon live there.

The couple said family was a critical part of the culture.

Kim Zenk said the native families would meet in the middle of the afternoon at their house. The father would come from the sugarcane field. The families would tune everything else out and meet with the father for an hour or two.

“It was incredible to see people with hope that didn’t have any before,” Steve Zenk said. “It was unbelievable to be able to leave Paraguay and know that a small piece of the country was better than it was before.”

Steve Zenk said that although the country is the third poorest in South America, family unity and kindness was still strong.

“The people there are totally joyful, even though they have no material items at all,” he said.

The couple has taken several mission trips to Mexico, and they are already planning their next Habitat for Humanity trip.

Kim Zenk said that although the volunteers helped the Paraguayans, the help they received was also important.

“We like to think we were building for them, but the takeaway is what we received,” she said. “We got this awesome feeling that we can share with others. Everyone has the opportunity to do something for someone else. It can be something really small, but it’s worth it.”

Steve Zenk said the trip changed his outlook on life.

“It changes the way we look at things,” he said. “You learn to be very grateful for what you have.”

Of the 6.34 million people living in Paraguay as of 2011, more than 35 percent lived in conditions of poverty and nearly 20 percent in extreme poverty, meaning earning less than $1 a day.