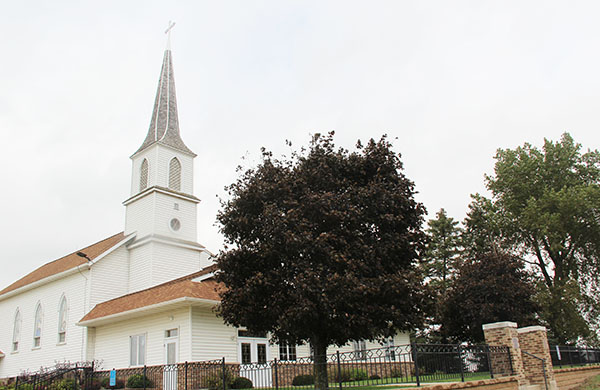 GLENVILLE — A church right off of Interstate 35 two miles north of the Iowa border will celebrate its 150th anniversary this weekend.

The celebration at Round Prairie Lutheran Church will begin at 10:30 a.m. Sunday with a special worship service. After the service will be a luncheon at noon and a program at 2 p.m. 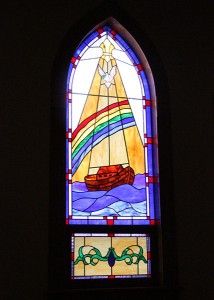 One of the stained glass windows featured at Round Prairie Lutheran Church. – Sarah Stultz

Church secretary Virginia Nagel said the program will include a performance by the Careyaires, other special music and sharing of memories about the church.

“It has been a community effort,” Nagel said of the success the church has seen over the years.

According to the church’s history, Round Prairie Lutheran Church was established in 1856 by a small group of pioneers with their families.

Hailing from their native land of Norway, they were confronted by many barriers, including the language and ways of travel, according to the church history. They began to clear the land of trees, to hew logs for their homes and to prepare the land into small plots for planting crops for food and livestock.

They brought with them what was dear to them: their Bibles, hymnbooks, catechisms and daily prayer books. One of their priorities was to quickly establish a place of worship.

As the area began to be settled, Round Prairie was part of a parish that included churches from Northwood and surrounding settlements, the history states.

The first service was held in a home.

Because of disagreements concerning Bible teachings on slavery and the Sabbath Day, the church in 1868 divided into two separate churches, before rejoining together 50 years later.

This was not the only trying time for the church.

In the summer of 1880, Round Prairie was destroyed by a tornado, and parts of the building were scattered over the countryside. But that didn’t stop the congregation. The new church was built on the same plot, but was later moved across the road. A cemetery now stands where the building used to be.

It has had more than a dozen pastors over the years and at one point offered a parochial school. The present pastor is the Rev. Kent Otterman. 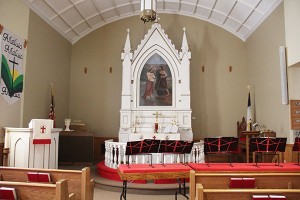 Round Prairie Lutheran Church will have a special service, luncheon and program on Sunday to celebrate its 150th anniversary. – Sarah Stultz/Albert Lea Tribune

“Round Prairie is truly a family church, with some of the families going back to the original members,” the church’s history states. “Some families have just been here forever. Some have moved in and stayed and some have come and moved on.”

“We are a family, not by blood, but by the love of God, our congregation and each other,” according to the statement.

Nagel said she has been going to Round Prairie Lutheran Church for about 45 or 50 years. The church averages about 60 to 70 in attendance each week, including people of all ages. The congregation’s oldest member is 99.

The church is part of Lutheran Congregations In Mission for Christ.