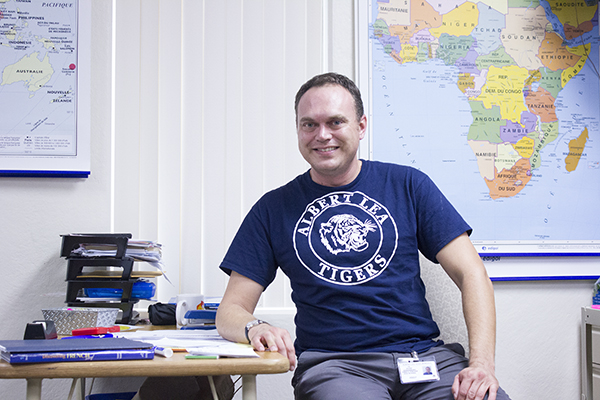 A Minnesota native with more than a decade of experience teaching French is looking to jumpstart the new French language program at Albert Lea High School.

Peter Sunnarborg, 40, a Chisholm native, was previously a French teacher for 11 years at Dominguez High School in Compton, California, before arriving in Albert Lea for the 2015-16 school year.

He said his students have accepted his personality.

“I have a strange sense of humor and they seem to be accepting that, which is good,” he said.

He said there is a lasting benefit to learning the French language.

“It’s good to offer this as a choice for kids because it can really enrich your life, not only through arts and culture, but with gaining friends and advancing your academic life,” Sunnarborg said.

He said there are similarities between Compton and Albert Lea.

“Kids are kids, whether they are in Compton or Albert Lea,” Sunnarborg said. “There are a lot of different personalities in class and I enjoy that. There’s diversity.”

He said he enjoys the scenery Albert Lea offers.

Sunnarborg was an undergraduate at the University of Minnesota and received his teaching license at Hamline University. He moved to Los Angeles after student teaching in St. Paul.

He said he grew tired of the traffic and high cost of living in Los Angeles and decided he wanted to move back to his home state. He said the quality of life in Albert Lea was a major factor in his decision.

“I saw the job posting and thought, well, I can do this,” he said. “I was interested with the program, principal and the support I was getting.”

Now that he is closer to home, Sunnarborg hopes to see his family more and travel.

“Looking at what other districts offer in the Big Nine, it seemed appropriate that we offer another language,” Niebuhr said.

Sunnarborg is the district’s lone full-time French teacher. There are also two full-time Spanish teachers and a fourth teacher who teaches both Spanish and French, in addition to eighth-grade courses called celebrate French and celebrate Spanish. The two courses are meant to expose eighth-graders to the languages as well as the cultures of French and Spanish speakers, Niebuhr said.