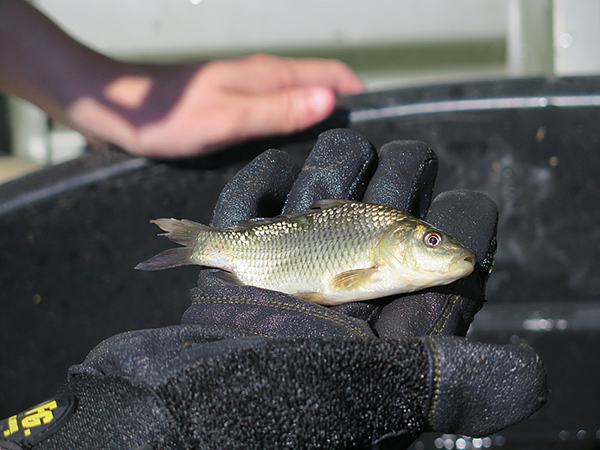 When you mention invasive carp, people nowadays probably think of bighead and silver carp — those flying fish we’re trying to keep out of Minnesota waters.

But the common carp that’s already here is an invasive species, too, and an undesirable one at that. It destroys aquatic plants and stirs up sediment, degrading water quality. Researchers in the north metro area are learning more about these fish as they try to come up with new ways to manage them.

A trap net set on shallow Rice Lake in Lino Lakes recently teemed with bluegills, bullhead and crappies — but it was a carp that fish biologist Jordan Wein was after. He works for Carp Solutions, a University of Minnesota startup. He was inserting electronic tags into fish to track them by antenna.

Wein said people curious about his work get a lesson about carp.

“They all think these are the fish that jump in your boats,” he said. “It’s just a good educational opportunity to say, ‘No, we’re working on common carp. It’s what your grandpas used to catch and threw them back because they didn’t taste good.’”

Rice Lake’s carp date back to the 1880s, when the fish arrived in Minnesota by train as part of a federal program and were introduced in lakes throughout the state. Today they’re unpopular among anglers and can accumulate industrial chemicals known as PCBs. But back then, some of the European immigrants who settled here loved eating them.

“They all thought we can do nature one better, and they thought the carp would improve their lives here, apparently,” said Peter Sorensen, fisheries professor and founder of the Minnesota Aquatic Invasive Species Research Center at the U of M.

“They got it wrong,” he said, “and after about 10 to 20 years of active stocking and management for common carp, by the late 1800s, early 1900s, people started noticing that the lakes were getting green and the plants were disappearing.”

So, for the past 100 years, people have been trying to get rid of carp. But there’s no silver bullet. Netting has barely made a dent. Each female lays hundreds of thousands of eggs a year. The fish can travel long distances. And they have no trouble finding plenty of food, rooting around on the bottom of lakes.

“As they feed in the bottom they dig up the bottom and rip out the plants,” he said. “The turbidity of the lake changes, the plankton and things living in the lake change, the lake gets green and they remake the entire environment around them.”

But researchers have learned a lot about common carp in the last decade, he said, and controlling them is possible.

The latest research and management efforts are happening in a system of lakes in the north metro area that are all connected by Rice Creek. Sorensen is in the middle of a National Science Foundation-funded project that involves tracking radio-tagged adult common carp throughout the year. Sometimes that includes recording 24-hour movement data, which requires U of M graduate student Nate Banet to pull all-nighters.

“We’ve found some pretty remarkable stuff doing that,” Banet said. “We found some fish travel over 8,000 meters through four different lakes — that’s over 4 miles this fish traveled in a 24-hour period.”

Banet said other fish like northern pike also migrate in the spring to spawn, but common carp can continue the cycle for more than 50 years. Pike only live about seven years.

The Rice Creek Watershed District is looking to Banet’s and Sorensen’s research, as well as work by Carp Solutions, to better understand common carp in the chain of lakes. The more data researchers and local watershed managers have on carp migration, the easier it will be to cut off their movement — one strategy that could bring their numbers down.

“It sounds like a big number, but you can’t really put it in perspective until you see it,” he said. “It is 30,000 to 40,000 fish. We thought, great, we probably got a big portion of the population in that catch. Lo and behold, he comes back the following winter and captures another 180,000 pounds of carp.”

Kocian said netting will be only one tool used to bring down the carp population in the chain of lakes.

“In order to get that long-term sustainable management that we really want, we’re going to have to find some other tools to mix in with that,” he said, “whether it’s a barrier, whether it’s aeration, whether it’s stocking game fish.”

It’s worth the effort, he said; Long Lake is considered impaired. Pollution from storm water runoff is part of the problem, but so are the carp.

“We’re pretty sure it is a big piece of the puzzle,” Kocian said. “We’re not going to meet the water quality goals we have without managing carp.”

And as an added benefit, if lake managers can control common carp, they’ll be that much more prepared if invasive silver or bighead carp spread to Minnesota.