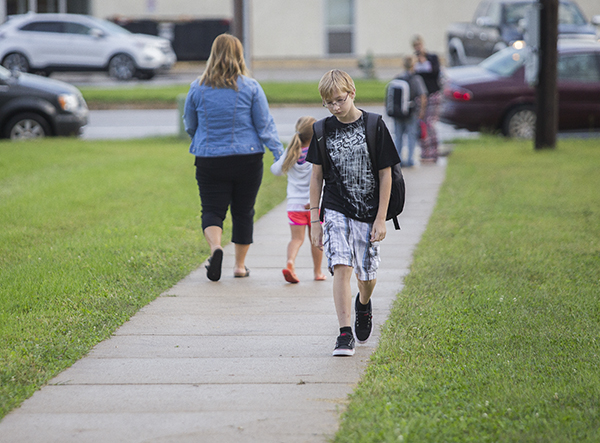 Sibley Elementary welcomes a new principal to the school

Teachers and students were excited today in Albert Lea for the first day of school.

“It’s always nice to see the kids,” said Samantha Waibel, an English-language learner teacher at Sibley Elementary School. “We haven’t seen most of them in three months. Summer is a nice break, but it’s nice to get back into the routine.”

Hannah Schumacher, a third-grade student at Sibley, was also pleased to be back in school.

Spencer Clark, a seventh-grader at Southwest Middle School, said the school year is a welcome reprieve from summer break. 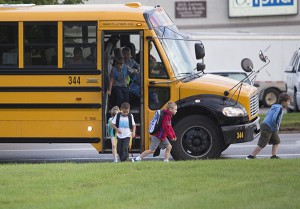 One of the first buses arrives to drop students off for the first day of school this morning at Sibley Elementary School. – Colleen Harrison/Albert Lea Tribune

“It’s good to be back,” Clark said. “The summer can get boring.”

The first day of school at Sibley was met with a new principal.

Diane Schultz, previously an assistant principal and curriculum coordinator at Lakeside Elementary School in the Glencoe-Silver Lake School District, is excited for the position.

“I am humbled to come into a school that is doing very well,” Schultz said. “I think the school district matches my vision that we are really doing the best for our students, no matter what.”

Sibley was named a Reward School last week after being named one of Minnesota’s higher performing Title I schools.

“It’s important for families to know I care,” she said. “We’re all on the same page, with the same goal. People to need to know that I am easy to talk to. I love what I do.”

Schultz has been a third- and fourth-grade teacher at the Glencoe Silver Lake School District. She was also a response to intervention specialist.

She said she has adopted a great staff and wants to develop a good relationship with them so gains can be made for students. Schultz stressed not only meeting targeted goals but growing from that target.

“The great foundation we have here is wonderful, and I look forward to meeting that and expanding it,” she said.