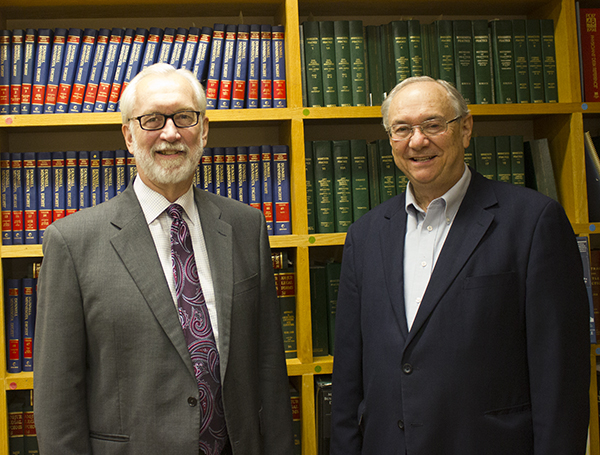 Attorneys Phil Kohl, left, and Mark Anderson, along with John Hareid, not pictured, will retire at the end of October. When they do, the law firm they are partners in will close. – Sam Wilmes/Albert Lea Tribune

After 40-plus years, 3 A.L. lawyers to retire, practice to close

Three Albert Lea lawyers with approximately 40 years of experience are getting ready to retire.

Christian and Peterson Law Firm — consisting of partners Mark Anderson, Phil Kohl and John Hareid — will likely close by the end of October, when the three attorneys are set to retire.

The firm has been together since 1991. The firm originally consisted of 10 attorneys, but the other seven moved on, either through retirement or other jobs.

“This is the only place me and John have ever worked in Albert Lea,” Kohl, 65, said. “The way we have practiced law has changed dramatically. Things are getting much more specialized than when we started. I’m not from Albert Lea originally, but I consider it my home. I love it, it’s a great place to live and practice law.”

Kohl arrived in Albert Lea in fall 1975 when he joined the law firm of Christian, Slen, Savelkoul, Johnson and Broberg.

Anderson, 67, came to Albert Lea in December 1975 when he joined with attorney Steve Erickson. They then joined Peterson, Chesterman and Hareid in 1977. The two firms combined in 1991. Over the years, the combined firms were the springboard for judges, including John F.D. Mieghen, William R. Sturtz, Thomas R. Butler, John A. Chesterman, James E. Broberg and Kevin H. Siefken.

Over the course of his career, Kohl has practiced municipal law and litigation, both in the plaintiff and defendant side. Kohl attended South Dakota State University as an undergraduate and the University of Minnesota Law School.

Anderson said he will miss his job when he retires.

“I’ll miss working with our clients, the interaction with other lawyers, our staff and the people in the court system,” Anderson said. “I’m surprised how quickly the 41 years have gone. I’m from Albert Lea and I never thought I would come back here, but I have and I love it.”

Anderson has practiced farm drainage ditch law, wills, probate and family law. He was an undergraduate student at the University of Minnesota and attended William Mitchell for law school.

Anderson said technology has changed considerably over the course of his career. He said when he started it wasn’t too difficult to set up a law office and physical law books and typewriters were the norm, but now court forms are electronic and e-filing is required.

He said the law firm was unsuccessful when it tried to hire lawyers to take their place when they retire.

Hereid is a certified real estate specialist who specializes in real estate transactions and business law. He attended Minnesota State University, Mankato and went to William Mitchell for law school.

The city purchased the Christian & Peterson building in July. Under the agreement, the law firm could have remained a tenant of the building until Nov. 30. The city will look for other tenants to operate the space on a short-term basis until a larger redevelopment plan is in place for the whole avenue.

The city is looking at redeveloping the 300 block of South Broadway to add tax base, jobs and housing in the area.

Plans are also in the works for housing developments at both the Freeborn National Bank building and the Jacobson Apartments building, as part of the city’s revitalization plan.