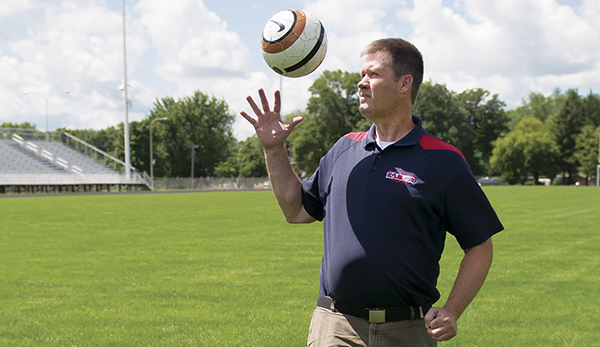 After holding its opponents to one goal through the first two games, the Albert Lea boys’ soccer team aims to carry that defensive success into Big Nine Conference play.

Albert Lea tied Kasson-Mantorville 1-1 in overtime during the season opener and won 1-0 Saturday at Byron.

“Our defense has played really well,” said first-year coach Bob Furland. “They’ve all played together since they were young kids, and they’ve really gelled together.”

Foster Otten — an All-Conference selection as a junior last year — returns to lead the Tigers between the posts. In Albert Lea’s win over Byron, Otten notched three saves. 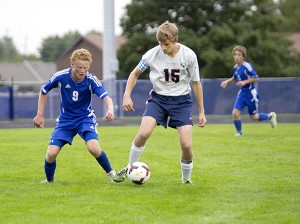 Albert Lea’s Sam Ehrhardt is defended by Kasson-Mantorville’s Max Blaisdell Thursday at Jim Gustafson Field. Ehrhardt had an assist in the Tigers’ second game of the season at Byron. – Colleen Harrison/Albert Lea Tribune

“The great part about Foster is that he’s so calm,” Furland said. “Everyone has such great respect for him back there. It brings that sureness to our team as a whole.”

The only goal of the game against Byron was scored by Colton Mowers with an assist from Sam Ehrhardt.

“Sam takes the time to make great passes,” Furland said. “We’ve been rotating with four guys in the midfield, and it was fun to watch them click this weekend.”

“I’m thinking it’s going to be another close game,” Furland said. “They’re a well-coached team. We’ll have to be at our best.”

The Cougars are coached by Jerrad Aspelund, and the team was 12-5-2 last season.

Albert Lea was 5-11-1 last season. However, the Tigers were a few close wins from .500. Five of their last six losses were by one goal.

“I can’t say enough about the support of our athletic department,” Furland said. “It’s been great to go to the field every day.”