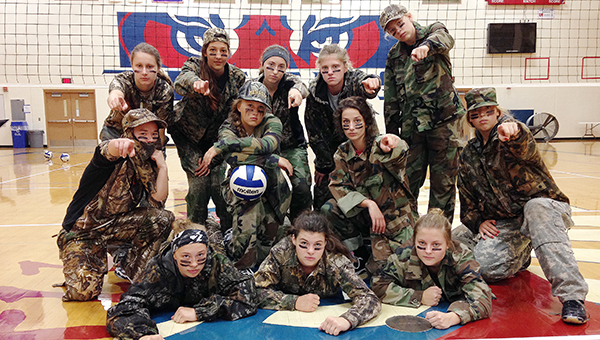 The Albert Lea volleyball team wears camouflage on the court at Albert Lea High School to show support to those who are serving and have served in the United States’ military. Current and former members of the military will receive free admission and be honored during intermission at the Tigers’ home opener at 7 p.m. Thursday. — Provided

To honor and show support for the United States military, camouflage clothing is encouraged to be worn by students and fans at the Albert Lea volleyball team’s home opener against Austin.

Albert Lea coach Jamie Cameron said former and current members of the military will receive free admission and will be honored at intermission.

“We fought back to win the fourth (game) with aggressive serving and determined defense,” Cameron said. “There were a lot of volleys back and forth, but unfortunately we couldn’t regain the momentum in the fifth.”

Austin began the season with five consecutive losses before sweeping Minneapolis South and Blooming Prairie in its last two matches.

Last season, Albert Lea swept Austin 3-0. The Tigers have won the last three matches against the Packers with a combined game score of 9-1.