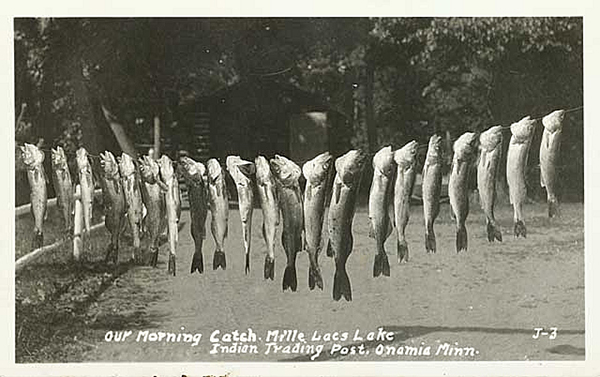 Minnesota wasn’t always obsessed with walleye. Not so long ago, people cast their lines mostly for food, and were happy with whatever they caught.

To understand the state’s walleye devotion, you need to know about two things that changed the landscape of angling: tourism and technology.

Getting away to the lake

Minnesota’s earliest lake resorts date back to the 1830s. But the primary customers weren’t Minnesotans. They were rich southern landowners who began riding steamboats up the Mississippi to get away from the heat.

“They didn’t have air conditioning back then,” said Mark Haidet, a former Minnesota Historical Society researcher. “Minnesota was cooler than down south.”

Those first vacationers stayed on White Bear Lake and Lake Minnetonka, around which an early tourist trade emerged. But it didn’t center around fishing. The resort industry wouldn’t expand into the northern lake country for decades.

The catalyst came with the end of World War II and the surge of auto production and prosperity that followed. Suddenly, middle class people had money and time and cars.

Now folks could easily drive north to Lake Mille Lacs and Gull Lake, and even farther to the border waters, Haidet said.

“When the northern lakes opened,” he said, “the trade was primarily fishing oriented.”

And since these were vacationers — not local farmers and lumberjacks fishing for food after a day of work — they had time to go after specific fish. Their species of choice: the elusive, tasty, and easy-to-clean walleye.

Even after the expansion of the resort industry, vacationers generally cast lines from simple boats powered by oars or very small engines. The more experienced anglers tracked walleye hot spots using landmarks on shore, but it was an inexact technique.

Lindner, 56, was just a kid when his father, Ron, and uncle Al moved from Chicago to Brainerd to start their company, Lindy Tackle. He remembers the day in 1968 that Carl Lowrance brought them an early model of his Fish Lo-K-Tor — the Little Green Box — and asked them to try it out.

He knew right away the machine would change everything.

“It took the luck out of angling,” he said.

The Green Box was the first sonar device built for anglers. It had one dial on the face which showed depth, and twitched when a fish swam below.

Walleye move around a lot. In the spring they feed in the shallows, and move out into deeper water as the summer heats up. They’re hard to keep up with, Lindner said, if you’re fishing hotspots from memory.

DNR fisheries supervisor Chris Kavanaugh used one of the early models in the 1970s.

“Reading it was almost more art than science,” he said, “but it worked.”

If an angler put up with the crackling 6-volt battery and the hard-to-read dial, Kavanaugh said the machine could peel back a lake’s surface, and reveal its secrets.

Lindner said it was natural to use the new technology on elusive walleye.

The Fish Lo-K-Tor showed up on bait shop shelves in 1957. Within a few years it was popular among Minnesota anglers, who became obsessed with walleye, and the technology used to catch them.

Huge walleye statues grew up along roadsides. Three separate cities in Minnesota claimed to be the “Walleye Capital of the World,” and in 1965 Minnesota designated walleye as the official state fish.

Now, more than 50 years later, Minnesotans are catching 4 million pounds of walleye every season, and literally using boatloads of technology to do it.

Modern anglers run 20-foot boats packed with depth finders, side scanners and GPS devices with downloadable lakebed maps. Finding the perfect walleye fishing hole is a click away, yet walleye are still thought of as an elusive catch.

“With the technology we have now,” Lindner said, “I can take a bad angler, and turn him into a good angler in 20 minutes.”