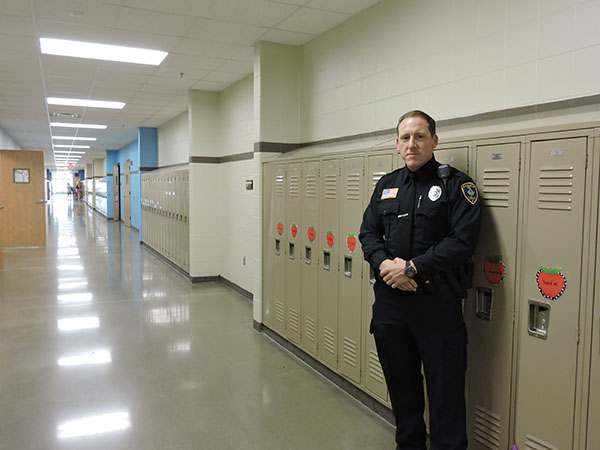 Originally Murphey came to Wells after being hired on at the Wells Police Department in June, however, his position went to full time when he accepted the USC position after applying in August.

Prior to his employment in Wells, Murphey worked in a variety of jobs including repossessions for 10 years and working for the United States Department of Defense as a civilian flight attendant transporting troops in and out of war zones in Kuwait and other parts of the Middle East. It wasn’t until 2010 that the now 39-year-old police officer got his start in law enforcement.

Murphey explained that he first pondered the thought of going into the aviation field, but felt the road was looking too long and switched gears. 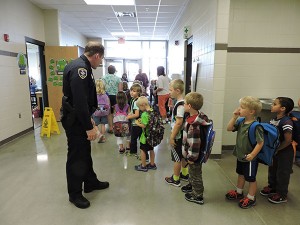 Murphey has been a reserve police officer in Kasson since May of 2012 helping with larger events such as parades and special events. He also worked for the Olmsted County Sheriff’s Office primarily providing transportation for civil commits, individuals who are dealing with mental health issues and are being committed, or escorting prisoners back and forth from court, jail or prison.

He decided to come to Wells to continue his career in a smaller community.

“There is something very special, very unique about working in a small town. There’s a little more accountability, I think.”

The single father of two also said Wells seemed like a perfect place to raise a family, which also weighed in on his decision, although his move is still incomplete. The officer currently commutes to work from Dodge Center with his two children who now attend USC, but he’s looking for a home in the area to settle into before the winter.

“I’m extremely fortunate, and I’m still somewhat in shock that I’m here,” he said. “It’s been an incredible opportunity.”

Murphy finds working in a school environment is a stark contrast to working on the streets. He explained that, while patrol officers are often dispatched into bad situations, things are completely different at USC.

“Here things are great all the time,” he said. “There’s — of course — situations that happen, but I can communicate on a different kind of level with (the students) because we are friends first.”

He feels his job entails many different things. First, it is his job to ensure the safety of all the students and staff at USC. He also wants to create a positive image of law enforcement for students early on. Along with dealing with safety concerns and an occasional behavioral issue, Murphey helps oversee truancy.

For Murphey, it’s not just about getting students through the door; it’s a matter of working with social workers, human services, parents and other team members to problem solve.

“When a student doesn’t come to school, a lot of times there’s a reason why,” he said.

Murphey will be the first to admit he’s still learning.

However, he’s eager to learn.

“The kids that attend USC are good kids,” Murphey said. “I feel so grateful to be a part of their lives.”