It’s going to be a busy weekend in Albert Lea. 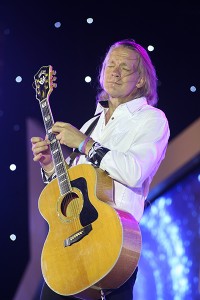 Billy McLaughlin will perform Saturday at the Lighthouse Theatre and Event Center. – Provided

Between the festivities for Albert Lea Community Theatre’s 50th anniversary, fundraisers, power boat drag racing, art shows and other events, there’s something for everyone.

World-renowned guitarist Billy McLaughlin will perform at the Lighthouse Theatre and Event Center on Saturday for a night of music and fun. The show begins at 7:30 p.m.

McLaughlin, recognized internationally as a world-class guitarist, is an Emmy Award-winning composer who has appeared on Billboard’s Top Ten chart.

A Minnesota native, he has 14 CD releases and numerous awards.

Formerly a right-handed guitarist, McLaughlin suffered for years with a neuro-muscular disorder called focal dystonia, and ultimately re-learned his instrument left-handed. His comeback has been captured in an independent documentary film called “Changing Keys” and a concert film called “Coming Back Alive.” He now serves as an ambassador for awareness for the Dystonia Medical Research Foundation.

Tickets can be purchased at Marshall Street Music, Hy-Vee and Stadheim Jewelers in Albert Lea and Coffee House on Main in Austin. They can also be purchased online at http://lighthouseeventcen.wix.com/lighthouse.

Here’s a roundup of other events taking place in the area this weekend:

• “Asia Speaks,” an exhibit showcasing the work of Dee Teller, an internationally acclaimed, Minnesota-based sumi-e brush painter, will be open from 9 a.m. to 4 p.m. at the Freeborn County Arts Initiative, 224 S. Broadway.

• “Golden Gala: Behind the Scenes” will begin at 7 p.m. at the Marion Ross Performing Arts Center.

The show will honor Albert Lea Community Theatre’s 50 years of history and volunteers with musical tributes, video interviews and a look back at the formative days of ACT. Cost is $25 for the single show or $30 for both the Friday and Saturday events.

• The Steam Threshing Festival will be all day at Heritage Park in Forest City.

• The Albert Lea Farmers Market is open from 9 a.m. to noon in the Northbridge Mall parking lot.

Homemade breads, baked goods, honey and more will be available for purchase.

• Community Sew Day will be from 9 a.m. to 4 p.m. at the Fairlane Building at the Freeborn County Fairgrounds.

Participants can come all day or for however long they can sew and should bring sewing machines, scissors, pins and a sack lunch. Sewing kits will be provided.

Community Sew Day is part of the local Shinefest mission. People with questions can call 383-8977.

Menu includes salads, turkey and ham sandwiches, and bars. Cost is $7 for adults, $3 for children ages 5 to 10 and free for preschool and under.

• The 5-kilometer Bike Ride for Community Cats will run from 11 a.m. to 2 p.m. Registration is $20. Children 12 and under are free. Registration includes a T-shirt and cat ear head bands. Proceeds benefit the Freeborn County Humane Society.

Bring the whole family to ride or walk. After the ride at the shelter parking lot, there will be refreshments, a children’s cake walk, limited edition paw paintings by cats at the shelter for sale and a special adoption event.

• A cancer benefit for Tammy Brandt Bryand will be from 11 a.m. to 3 p.m. at Grace Lutheran Church. There will be a salad luncheon, bake sale and silent auction.

• “Asia Speaks,” an exhibit showcasing the work of Dee Teller, an internationally acclaimed, Minnesota-based sumi-e brush painter, will be open from 1 to 4 p.m. at the Freeborn County Arts Initiative, 224 S. Broadway.

• The Upper Midwest Power Boat Association drag racing show will be from 1 to 6 p.m. on Edgewater Bay.

Six different boat classes, ranging from speeds of 60 to 120 mph will race each other during the 1,000-foot drag racing event. There were about 30 boats that raced last year.

• The 40th annual Freeborn County Pheasant and Habitat Banquet will be at the 4-H Building at the Freeborn County Fairgrounds. Social hour begins at 5:30 p.m. with dinner at 6:30 p.m.

Tickets are $20, which covers the meal and a chance at one of the 10 grand prizes. There will be 250 total prizes and a 50-cent raffle. Jim Hansel prints will be available.

• “Golden Gala: On Stage” will be at 7 p.m. at the Marion Ross Performing Arts Center.

The show features 18 musicians performing highlights of ACT’s 50 years. Many of the songs will be sung by those who originally performed them on ACT’s stage.

Among the performers will be Joan Muschler singing “Hello Dolly,” Sue Jorgensen performing a number from “Sound of Music,” and Diane Heaney singing a song from “Happy Days.”

Bands playing are The Oddfathers, The Groove Hawks and Angel Val. Cost is $7.

• A St. John’s Lutheran Community Auxiliary benefit luncheon will be from 11 a.m. to 1 p.m. at the St. John’s community chapel, 901 Luther Place.

Menu includes lasagna, garlic toast, Mrs. Gerry’s salad, homemade bars and beverages. Donations will be accepted. People can either drive through or dine-in.

All proceeds benefit St. John’s resident, the gardening program, Christmas gifts there and the capital campaign for St. John’s on Fountain Lake.

• Autumn in the Village will be from noon to 4 p.m. at the Freeborn County Historical Museum.

• A new exhibit titled “Our Mothers and Daughters: Four Generations of Artwork” will open from 1 to 3 p.m. at the Albert Lea Art Center, 226 W. Clark St. The exhibit features the work of Carli Marticia Bailey, Rachel Bailey Collier, Marticia Davis Bailey and Rachel Marticia Davis and runs through Oct. 17.