What’s the cost to bring pro soccer stadium to Minn.? 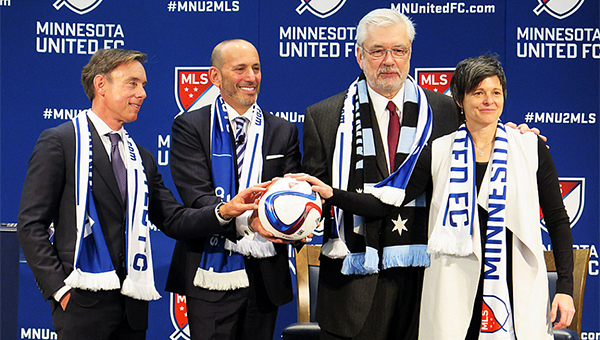 Will project get tax breaks, exemptions?

St. Paul has been talking over a potential soccer stadium in the city’s Midway neighborhood, but even with a potential deal in the offing and votes by the city and Ramsey County, some key parts of the deal remain unknown.

Among them: What, exactly, was the team expecting when it sought tax breaks for its planned Major League Soccer stadium?

Team owner Bill McGuire brought up a construction sales tax break, a property tax exemption and limits on future taxes when he pitched the idea to state lawmakers in April.

Of those, the property tax exemption seems to be the biggest question. It’s thought to be worth millions of dollars a year for an 18,500 seat facility the team estimates will cost $120 million to build. But no one is willing yet to put a dollar figure on the tax bill.

The Ramsey County officials who calculate property taxes say they can’t assess a property tax on a stadium that doesn’t yet exist. Assessors typically count on real estate sales and comparable properties to evaluate taxable value, but stadiums rarely change hands, and there isn’t another venue like it in the Twin Cities.

“I note that my office has not yet seen any proposed plans or construction costs and that we could only assess a completed facility,” said Ramsey County assessor Stephen Baker, in response to an inquiry about the stadium’s potential value. “So, it is far too early for me to conclude to an estimate of value.”

Vanderbilt University sports economist John Vrooman ballparked the property taxes for a proposed Minneapolis stadium at $4 million in May. A recent estimate by the St. Paul Pioneer Press estimated the St. Paul tax bill at $5.48 million, based on the $120 million construction cost.

Baker, the Ramsey County official who would value a new stadium, says it would likely be lower than that based on what a stadium would be worth.

Compare the project costs and the total value of those two city-owned, tax-exempt multi-use sports facilities: Together they have an assessed value of about 44 percent of what it cost to build them.

Apply that same formula to a soccer stadium, as described by Minnesota United, and the stadium would be valued at about $56 million. That’s not how properties are actually valued, and the real life process is more complex.

Still, a tax calculator provided by Ramsey County indicates a potential property tax for a facility of that value would be about $2.4 million annually.

That cost may be what Minnesota United is seeking to avoid. And over time, it’s more apparent why the team might ask.

The property taxes on a privately held soccer stadium could rival the cost of building it. At a routine 2 percent inflation rate, the taxes might rise to $4.3 million a year by 2045, a typical 30-year life span for a stadium. The team would have paid more than $100 million in property taxes by then.

County officials declined to assess that estimate, saying each facility is unique, and the comparisons have to be limited. Minnesota United did not respond to a request about its estimate of the value of the tax break.

The city of St. Paul and Ramsey County have passed resolutions supporting such a tax break, although neither city council members nor county commissioners publicly discussed the dollar value of the exemption or precisely what they were exempting.

But the resolutions are a key step in the process: they’re the official signal to the Legislature that St. Paul would like the state to take action.

St. Paul Mayor Chris Coleman, in an interview with MPR News, offered some additional detail on how that may work: He said St. Paul expects the team give to the stadium to the city.

“We have said we support not having property taxes collected, because ultimately, the facility as we contemplate it would be turned over to the ownership of the city of St. Paul, and typically a facility like that doesn’t pay taxes on the property,” Coleman said.

The Legislature granted just such an exemption to the Vikings stadium in 2011.

A spokesman for Minnesota United confirmed that the team is contemplating giving a stadium to the city. The initial ask in Minneapolis was for a tax break on a stadium still owned by the team, but owner Bill McGuire said in April that he would be “not averse” to public ownership, although he didn’t say on what terms.

“The advantage here is that there isn’t public funds going into the construction of the stadium itself,” Coleman said.

Coleman said he thinks the deal will be a winner, despite potentially conceding millions of dollars in property taxes. He and other officials hope it will spur the soccer team’s owners to redevelop a shopping center that surrounds their stadium.