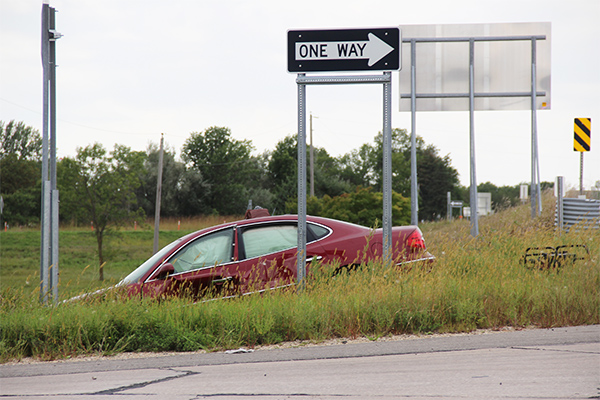 One person was taken to the hospital Wednesday afternoon after a car crash near Clarks Grove.
– Sam Wilmes/Albert LeaTribune

A Hollandale woman was taken to the hospital with non-life threatening injuries Wednesday afternoon after a car crash near Clarks Grove.

Dotty Spores, 46, the driver of a Mazda 626 ES-LX, was reportedly heading north on the ramp from Interstate 35 to U.S. Highway 251 when she reportedly failed to yield at the intersection and struck a 2009 Buick Lacrosse, according to the Minnesota State Patrol.

The Buick was driven by Teri L. Johnston, 70, of Hollandale. She was reportedly heading west on Highway 251.

Johnston was transported to Mayo Clinic Health System in Albert Lea. Her daughter, Susan Johnston, 47, the passenger in the Buick, was reportedly not injured.

Dotty Spores and her daughter, Ashley Spores, 18, the passenger in the Mazda, were reportedly not injured.

The report stated alcohol was not a factor in the crash. Everyone was reportedly wearing seatbelts.

The Freeborn County Sheriff’s Office assisted at the scene.