A quarter of a century’s worth of memories can be found in one Albert Lea native’s recently published book.

Jerry Burtis’ “Just the Ticket: My 25 Seasons with the O’Malley L.A. Dodgers” chronicles Burtis’ time as a ticket taker at Dodger Stadium in Los Angeles. 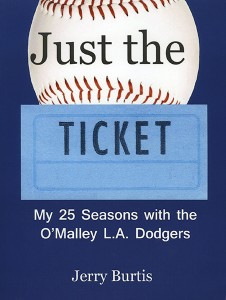 Burtis, now 82, grew up in Albert Lea and graduated from Albert Lea High School in 1952. From there he went onto Hamline University where he majored in art and physical education. He graduated in 1956 and then moved out to California with his wife, Jane, to the Los Angeles suburb of Monterey Park.

During his time as a teacher, Burtis became interested in coaching basketball, as well. He learned his coaching method from Bill Sharman, in between Sharman’s time playing for the Boston Celtics and then as the coach of the Los Angeles Lakers. Burtis said he and Sharman became good friends through coaching, and remained friends up through Sharman’s passing in 2013.

When the Dodgers baseball team moved out to the west coast and the stadium opened in 1962, Burtis started working at Dodger Stadium part time as a ticket taker. His location was right by the private box of the O’Malley family — the family that owned the team at the time. 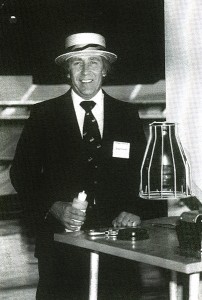 During Burtis’ 25 years taking tickets at that location, he came to meet a number of celebrities and other people of notoriety through the O’Malleys. Cary Grant, Danny Kaye, Coretta Scott King, Jackie Robinson, Jimmy Stewart, Gregory Peck, Sylvester Stallone and Pope John Paul II, as well as a number of former presidents, are just some of the spectators Burtis crossed paths with during his time at Dodger Stadium.

Talk to Burtis now, and he’ll still be able to rattle off tidbits and details of every one of those encounters.

Out of all the people he met through his time with the Dodgers organization, the people he treasured most will always be the O’Malley family, Burtis said. The family treated everyone — including and especially those that worked for them — with a kind of thoughtfulness that is not common today, according to Burtis.

“I was treated the same as the president of the United States,” he said.

Eventually the O’Malleys would sell the team to Rupert Murdoch and his News Corporation unit Fox Entertainment Group. Burtis said the change in ownership was blatantly obvious and called the new atmosphere in the stadium cold and foreign.

“It was nothing like the house that O’Malley built,” he said.

After a brief time of working at the stadium under the new ownership, Burtis decided to part ways with the organization in order to keep his memories of the Dodgers positive.

Burtis continued teaching and coaching in Rowland Heights, up until his retirement 21 years ago. Since then, his time has been spent telling stories and recounting his heydays at Dodger Stadium, leading to his newly-published book.

“Just the Ticket” is filled with anecdotes and memories from his time with the organization, as well as interviews with a number of people surrounding his time there. The book can be purchased from Amazon, and is also for sale at Dodger Stadium, UCLA and will eventually be for sale at Cooperstown, according to Burtis.