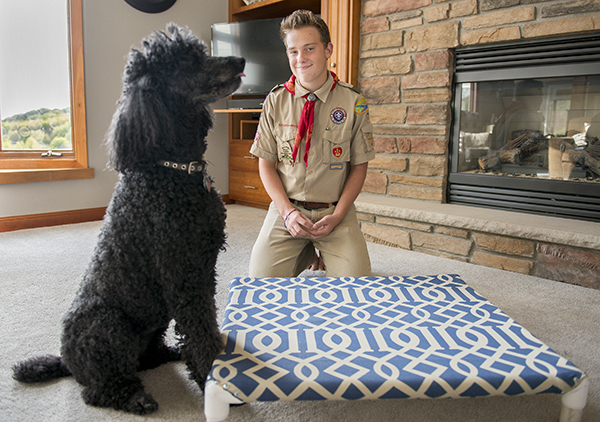 Colin Laurie, pictured with one of his family’s dogs, Sophie, recently assembled and donated 20 dog beds to the Humane Society of Freeborn County as a part of his Eagle Scout service project. – Colleen Harrison/Albert Lea Tribune

Colin Laurie is one step closer to being an Eagle Scout, thanks in part to his family dog.

Involved in Boy Scouts since middle school, Laurie, now 15, is a Life Scout. Before becoming a Boy Scout, he was a Cub Scout from the time he was in first grade.

According to Laurie, for someone to achieve the rank of Eagle Scout they have to complete a service project that benefits the Scout’s local community in some way.

Laurie began planning out his project in May, when one of his family’s two dogs, Emmie, inspired him to look into constructing dog beds to donate to the Humane Society of Freeborn County. The Laurie family adopted Emmie through the Humane Society about 11 years ago. Now about 13 or 14, Emmie is believed to be a poodle mix. The Lauries also have Sophie, an 8-year-old standard poodle. 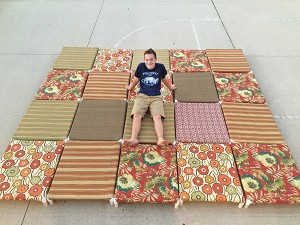 Colin Laurie poses with the 20 dog beds he constructed and then donated to the Humane Society of Freeborn County. – Provided

After deciding the type of project he wanted to pursue, Laurie had to draw up a project plan that would be approved by the Boy Scouts — something that Laurie’s mother, Linda, said involved a lot of paperwork. Over the past six months Laurie got his plans approved and constructed the beds.

Laurie said 20-foot pieces of PVC pipe were donated by Master Plumbing, which were then cut into different sections to make the frame and legs of each dog bed by Laurie’s father, John. The frame consisted of two 28-inch and two 24-inch pieces of pipe, while the legs were all 4 inches long.

Once the frames were constructed, different canvas patterns were cut to size and then attached to the frames using screws. Laurie’s family, friends and fellow Scouts helped him with construction.

In total, Laurie believed the whole construction process took about 85 hours, which was spread out over a few weeks.

The 20 beds were donated to Christa DeBoer and the Humane Society on Friday. Laurie said he should go in for a board of review on his final project that will determine when he will officially be an Eagle Scout within the next few months. Once he’s officially an Eagle Scout, he will then have a Court of Honor ceremony — a public celebration of the rank he has earned.

With Scouts having until they’re 18 to complete their Eagle Scout service projects, Laurie is ahead of the curve. He said his older brother, Sean, now 21, completed his service project at the age of 15 as well. Laurie said he started working on his project this year because he didn’t want to worry about not having enough time for completion when he gets closer to graduating from Albert Lea High School, where he is currently a sophomore. 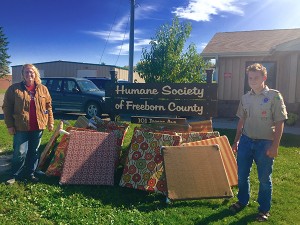 Colin Laurie donated the 20 dog beds he constructed to Christa DeBoer and the Humane Society of Freeborn County on Friday. -Provided

Laurie said he has enjoyed being a Boy Scout, and has gone hiking through mountains in New Mexico and canoed through the Boundary Waters as a Scout, among other activities. By becoming an Eagle Scout, he hopes to continue to be involved and to give back to others.

“I want to help out the community,” he said. “I feel that’s a nice way of doing it.”