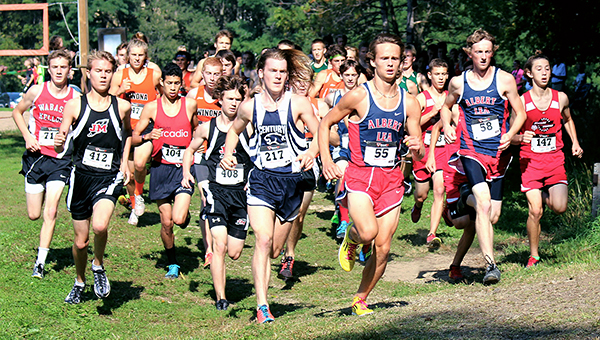 Albert Lea’s Jackson Goodell, with bib No. 55, leads the pack at the Jim Flim Invitational Sept. 26 at Winona. Goodell led the Tigers to their highest finish, third place, in 19 years of competing at the meet. — Kathie Lein/For the Albert Lea Tribune

After weighing offers from about 25 schools, Albert Lea senior runner Jackson Goodell made a decision.

With a verbal commitment on Oct. 3, Goodell plans to join the cross country and track and field programs at South Dakota State University in Brookings, South Dakota, next year.

“He will be a valuable asset to the Jackrabbits,” said Albert Lea coach Jim Haney. “I’m so happy that he will be able to continue his running goals in college as he has done so much for Albert Lea cross country. The coaching staff is looking forward to him doing great things at South Dakota State.”

Goodell said he has not chosen a major yet.

As a two-time Class AA state cross country qualifier and the defending Big Nine Conference champion, Goodell is aiming for back-to-back conference titles and a shot to improve at the state meet again this season. He took 92nd place as a sophomore at state with a time of 16:56.0 and improved to 68th place out of 176 runners in 16:35.7 as a junior.

“His greatest strength is his competitive drive,” Haney said. “He enjoys pushing himself against the top competition in Minnesota. He has a great work ethic and always wants to improve every race and every practice.”

In the Tigers’ most recent meet, the Ev Berg Invitational on Thursday at Brooktree Golf Course in Owatonna, Goodell took third place with a time of 16:28.1, and his freshman brother, Carson Goodell, finished fourth in 16:29.6.

“It’s been a lot of fun running this year with my brother,” Goodell said.

Another Albert Lea athlete who made a verbal commitment to South Dakota State was Jake Thompson, the shortstop on Albert Lea’s baseball team. He chose the Jackrabbits on Sept. 17.