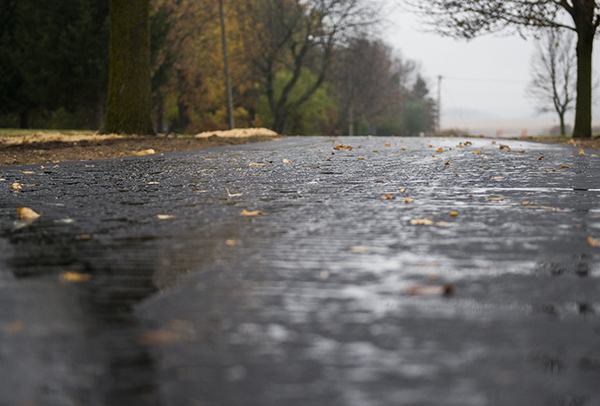 The last 1 1/2 miles of the Blazing Star Trail heading toward Hayward are now paved — leaving the construction of a bridge over Albert Lea Lake that connects to Myre-Big Island State Park, along with about a half a mile of trail remaining. – Colleen Harrison/Albert Lea Tribune

The extension of the Blazing Star Trail from Myre-Big Island State Park to Hayward is one step closer to becoming a reality. 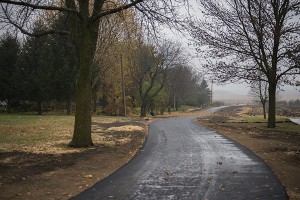 The last part of the completed trail begins at the city park in Hayward and ends near an electrical substation. – Colleen Harrison/Albert Lea Tribune

The last 1 1/2 miles of trail to Hayward are now paved — leaving the construction of a bridge over Albert Lea Lake that connects to the state park, along with about a half a mile of trail remaining, said Joel Wagar, area parks and trails supervisor with the Minnesota Department of Natural Resources.

Wagar said the last part of the completed trail begins at the city park in Hayward and ends near an electrical substation.

The DNR has about $450,000 from the 2014 legislative session to complete the remainder, but Wagar said this will not be enough to complete all of the work that needs to be done. He estimated at least another $1 million dollars would be needed.

Wagar said the planned route across Albert Lea Lake will have a bridge running parallel to the existing Canadian Pacific Railroad track.

“It’s going to be an expensive project,” he said.

The cost incorporates the bridge, as well as mitigation and environmental impact work and the remaining trail.

“We hope these funds will be coming in the near future so we can make that connection,” he said.

Wagar said the project is not currently on the state bonding list, but pointed out that this can change.

“There’s a lot of local interest,” he said. “There certainly will be some effort to try to get some funding for that trail. It has been a long time in planning.”

The Legislature first authorized the existence of the trail in 1996. Funding came in 1998, and it took five years until land deals were done so the trail could be built into the state park. Around the same time, the city of Hayward built a restroom in anticipation of the trail’s extension to the community.

In 2005, the state Legislature authorized $1.47 million in the bonding bill to extend the trail from the state park to Hayward. That funding had a five-year spending deadline,  but during the 2010 legislative session a law passed extending the deadline to June 2014.

In addition to offering a place to exercise, the Blazing Star Trail offers a diversity of environments for nature lovers, including wetlands, oak savannah, big woods and prairie, along with the wildlife that accompany each. The trail is used in the winter by cross country skiers.

Eventually the trail is planned to extend to Austin with the Shooting Star Trail. Once the trail reaches Austin, it would be about 20 miles long.