Funeral services for Ben S. Tufte, 99, of Albert Lea will be at 10:30 a.m. Tuesday at the Bayview/Freeborn Funeral Home. Bob Snow will officiate. Interment will be in Hillcrest Cemetery. Visitation will be one hour prior to the service. Online condolences are welcome at www.bayviewfuneral.com. 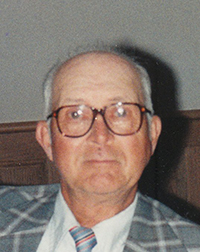 Ben S. Tufte was born on Sept. 7, 1916, in Albert Lea, the son of Andrew and Jensina (Bothum) Tufte. He grew up and went to school in Albert Lea. He was a lifelong resident of this area. On Oct. 5, 1940, Ben was united in marriage to Betty Smith in Hampton, Iowa. They made their home in Albert Lea. Ben worked for Wilson and Co. as a fireman and sprinkler man. Following his retirement, he and Betty spent winters in Corpus Christi, Texas, and summers in Longville for the next 25 years. They moved back to Albert Lea in 2004. Ben was a member of the Eagles Lodge and the Church of Christ where he served as an elder.

Ben enjoyed fishing and fixing fishing poles. He was able to go fishing last summer at the age of 98. He also enjoyed hunting coons and rabbits with his dogs and had been a deer and pheasant hunter in his earlier years. He liked watching sports of any kind, especially the Minnesota Twins, Vikings, Timberwolves and Wild. He liked doing crossword puzzles, playing Yahtzee, cribbage and huckley buck, and telling jokes. Blessed be his memory.

Ben was preceded in death by his parents, his wife, Betty, in 2008; grandson, Ronnie Bringgold, sons-in-law Ken Bringgold and Dwain Staude, brothers Peter and Oscar Tufte, sisters Pearl Tufte and Mildred Van Riper, and his mother-in-law and father-in-law, Margaret and Harry Smith.