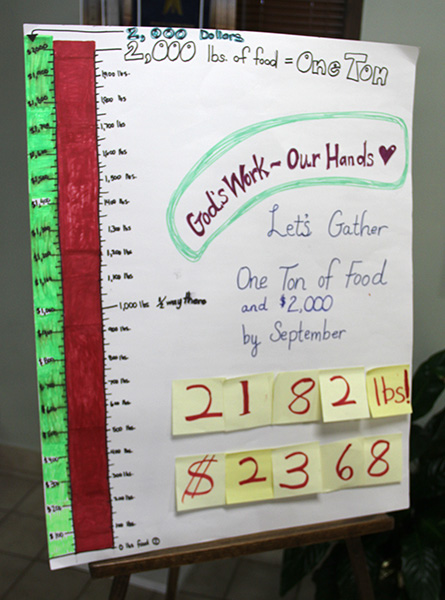 Ascension Lutheran Church members posted their goal and then filled it up when they received donations. – Sarah Stultz/Albert Lea Tribune

An Albert Lea church congregation, given a challenge to give back to the community, has collected more than a ton of food and more than $2,000 for the Salvation Army food shelf.

Church leaders stated the members chose to assemble school kits and to have a food drive that could boost contributions to the food shelf. In the end, they raised even more than they had set out to do.

“It’s an honor to be part of a congregation that is generous in their giving and their consideration of local needs,” said Lynda Everhard, a member of the Ascension Lutheran church council. 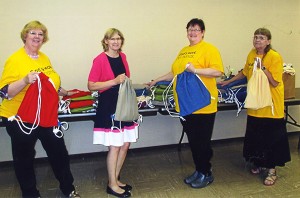 Diane Doppelhammer, Denise Sandager, Joan Anderson and Jane Pearson stand with some of the school bags made during the effort. – Provided

She said one of the things that drove their efforts was to know that in this part of southern Minnesota, 9 percent of people are food-insufficient, meaning they don’t have enough food.

Participants brought food items each week, and Darryl and Karen Flim toted the food to the Salvation Army each week.

Ascension youth decided to contribute $900 of their own money to go on a shopping spree to add to the total food collected.

A thermometer at the church tracked the progress to the goal.

The food will stay local, while the school kits will go to other countries.

Everhard said she hopes the project inspires the community to continue giving and maybe emulate a similar project.