Memorial services for Connie Joanne Neubauer, 81, of Albert Lea will be at 2 p.m. Wednesday at West Freeborn Lutheran Church.  The Rev. Mark Hillmer will officiate. Interment will be at West Freeborn Cemetery.  Visitation will be from 5 to 7 p.m. Tuesday at Bayview/Freeborn Funeral Home and one hour prior to the service at the church. Online condolences are welcome at www.bayviewfuneral.com. Connie died Friday, Oct. 9, 2015, at St. John’s Lutheran Community. 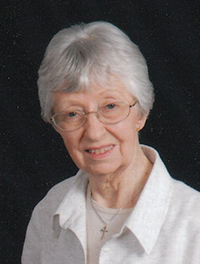 Connie Joanne Neubauer was born Sept. 25, 1934 in Manchester, the daughter of Walter and Ardis (Hallum) Hanson. Connie grew up in Manchester, attended Manchester grade school and graduated from Freeborn High School.  On May 16, 1953, Connie was united in marriage to Donald Neubauer in Wells. The couple made their home in Manchester and later Albert Lea.  In 1968 they moved back to Manchester where they owned and operated Don and Connie’s Station.  She was a member of West Freeborn Lutheran Church and was active in altar guild. Connie was a perfectionist, especially when it came to her sewing, knitting and crocheting.  She was also a wonderful baker, always baking pies, cakes and cookies.