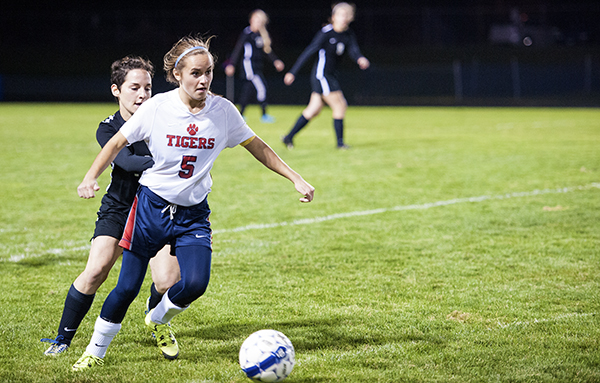 Although the Albert Lea girls’ soccer team entered the Section 2A playoffs with a No. 9 seed and a first-round road game, the Tigers are still the defending section champs.

To qualify for the quarterfinals, the Tigers beat New Ulm 2-1 Tuesday at Martin Luther College. We admire how Albert Lea kept its composure after the Eagles took an early 1-0 lead, especially considering that the Tigers only scored more than one goal in three of 14 regular-season games.

If Albert Lea gets the ball to bounce its way a few times, an upset is always possible. Just ask Rochester Century (7-7-3, 5-4-2 Big Nine). The Panthers already broke the ice in that department.

The Spartans had a No. 12 ranking from Minnesota-Scores.net’s Quality Results Formula, and the Panthers were No. 46. The QRF ranking separation between Albert Lea and Mankato West is even greater. The Tigers are No. 72, and the Scarlets are No. 7.

No doubt, the Tigers will need scoring from forwards Rachel Rehnelt and Claire Sherman, while goalie Kathryn Flaherty excels in the goal.

After a first-round bye, the Albert Lea boys’ soccer team will start the postseason at 7 p.m. Thursday at Waseca.

As the No. 5 seed, the Tigers are technically the underdog, although they have a better QRF ranking than No. 4-seed Waseca. Albert Lea is No. 27, while Waseca is No. 31.

Show your support for both programs this week through your attendance, cheering and good sportsmanship.

Take a big look at the big sky out there

It wasn’t Joe or Hannah. It was the state. I was speaking at some things in Montana. Montana is called... read more