A mass of Christian burial for Eileen R. Sager, 91, of Fairmont, formerly of Welcome, was at 11 a.m. today at St. John Vianney Catholic Church in Fairmont. The Rev. Peter Schuster officiated. 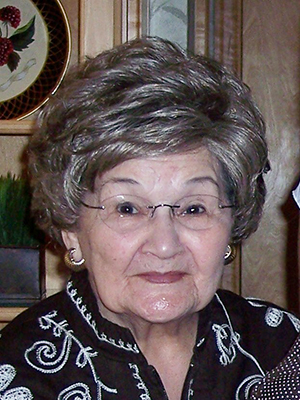 Eileen was called to her eternal rest on Thursday afternoon, Oct. 22, 2015, at Lakeview Methodist Health Care Center in Fairmont. Visitation was one hour prior to the service at St. John Vianney Catholic Church, 901 S. Prairie Ave. in Fairmont. Messages of sympathy may be sent to the family online at www.kramerfuneralhome.com.

Eileen Rita Maday was born April 5, 1924, in Silver Lake Township on the family farm to Joseph and Anna Marie (Weber) Maday. She attended school at Silver Lake Township County No. 43 and later was a 1941 graduate of Fairmont High School. Eileen was employed at Woolworth’s and Koenig Variety Store, both in Fairmont. On May 14, 1946, she was united in marriage to LeRoy Sager at St. Peter and Paul’s Catholic Church Parsonage in Fairmont. After marriage they lived in Fairmont until moving several times living in Texas, Colorado, Wells, Albert Lea, Olivia, Montevideo, Morton and in 1989 moving to Welcome. While living in Albert Lea she worked at St. Mary’s Catholic School and Stevenson’s. While living in Montevideo she worked at Anderson’s. LeRoy died Nov. 17, 2001.She continued to make her home in Welcome until moving to Woodland Manor in Fairmont and then to Lakeview Methodist Health Care Center. She was a member of St. John Vianney Catholic Church, St. Timothy Circle, belonged to the card and birthday club in Welcome and attended the breakfast gathering of the Class of 1941 every month. Eileen greatly enjoyed reading, playing cards, going to garage sales and auctions with LeRoy, crafts, embroidery and cross stitch. Taking care of family and enjoying her children, grandchildren and great-grandchildren were very important to her.