Food shelf moves closer to having a new home 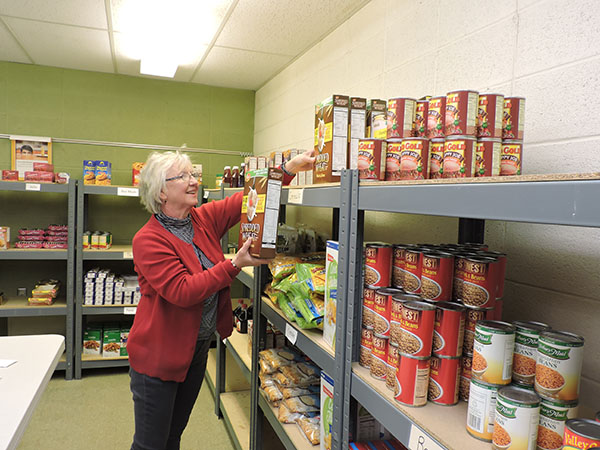 The most recent of those fundraisers raked in over $32,000 from area churches, organizations and individuals, which was further enriched by a 5-to-1 donation from  State Bank of New Richland. The bank capped its donation at a maximum amount of $20,000, pushing the total amount of the two-month fundraiser to more than $50,000.

The bank’s financial donation isn’t the first it has made to the project either. In fact, it was the bank that came to the food shelf and historical society last year to offer them the building so the groups would have a permanent home. 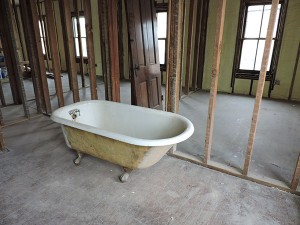 Old fixtures, including two clawfoot bathtubs and doors, are being saved in hopes of being restored and reused in the building project for the New Richland Area Food Shelf and New Richland Area Historical Society. – Kelly Wassenberg/Albert Lea Tribune

“During the last several months we’ve spent the majority of the time working on the exterior of the building, and really closing the shell,” Korogi said. “We’ve replaced a lot of windows  and put a new roof on the building. Just recently insulated the building so we can start doing more of the work on the inside.”

“You can’t see light through the walls anymore,” said Gail Batt, co-president of the food shelf, about the progress.

According to Batt, the goal is to have the historical society moved into the building by the end of the year, and the food shelf will relocate themselves from Trinity Lutheran Church to the remodeled building shortly after.

The exact timing of the transfer will be dependent on when funding is available, as well as volunteers who are utilized to assist in the project wherever possible.

After the food shelf moves to the location the group will then start working on phase two of the project, which will include remodeling of the second floor. The area, which was once home to 18 separate hotel rooms, will provide some storage space for the historical society and possibly some room for emergency housing.

Larry Goehring, president of the food shelf, said the exact plans for the second floor will depend on code requirements. However, it is the group’s hope that there would be rooms available to those who are displaced during a fire or who have perhaps fallen on hard times.

“Discussions within the community are ongoing and we have yet to determine the final plan,” Korogi said. “However, the final goal will be to provide the community with additional useable space in the building.”

Both phases of the project could cost upwards of $150,000, meaning the fundraising process is not over, he said.

Batt tries not to focus on the final numbers, though.

“We have a lot of faith in our community, in our churches, in the people that are volunteering and in total strangers,” she said. “That’s the only way this is going to get done.”

Donations can be sent to the New Richland Area Food Shelf by sending checks to P.O. Box 186, New Richland, MN 56072. Those who donate should specify whether they would like those funds allocated to the food shelf or the building renovation fund.