For ‘Back to Future’ fan, owning car was his destiny 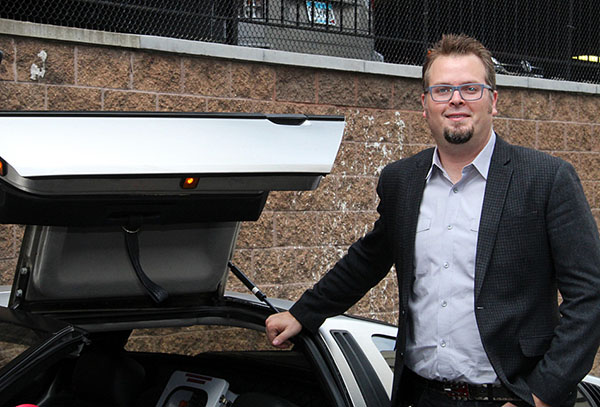 Paul Haga owns a DeLorean similar to the one featured in the “Back to the Future” movies. He showed off his car Monday in St. Paul. – Russell Barnes/MPR News

Great Scott! The future is now.

Today is the day Marty McFly traveled into the future in a flying DeLorean in “Back to the Future Part II.”

It’s a momentous day for superfans, but especially for someone like Paul Haga.

He’s no ordinary “Back to the Future” fan, who can quote movie lines or has an autographed poster or two at home.

And one that Doc Brown himself (Christopher Lloyd, for you non-fans) signed.

Oh, and he’s got a Mr. Fusion, a hoverboard, the self-tying shoes and, of course, a flux capacitor, which is what makes time travel possible.

He’s part of an exclusive club. Only about 6,000 DeLoreans are still in existence around the world, said David Swingle, owner of the DeLorean Motor Company Midwest.

And because of the film series’ enduring popularity, the car has reached icon status.

“It’s got a real broad appeal,” Swingle said. Kids, adults, they all recognize the car, he said.

Haga’s fixation with the DeLorean began in childhood, after he saw the first film in 1985.

“The time machine backing out of the back of the truck in the mall scene in the very opening of the movie was a defining moment for me,” he said.

The more he learned about the history of the famous car (at about $30,000, they were more expensive than regular cars so they didn’t sell very well), and that of auto executive John DeLorean (as his company floundered, he was arrested in 1982 in a cocaine deal) the more his fascination grew.

But it wasn’t until 2007 that Haga realized his dream. He had saved up money for a new car, but a friend told him about a DeLorean for sale in Minnesota.

He bought that instead.

“It went untouched for 20 years. It was rough,” he said. “There was probably a quarter-inch of dust and grime; it was sitting on four flat tires; the engine hadn’t been started in 20 years. It took some elbow grease to get it back.”

These days, Haga tends to drive the car on weekends (he admits he drives it on Target runs, so keep your eyes peeled). He makes appearances at parades or car shows, sometimes with other enthusiasts and members of the DeLoreans of Minnesota Club.

No matter where he goes, the car is like a magnet — people stop and point and everybody wants a photo or a selfie inside it. “This a normal day,” he said with a shrug one afternoon, when a handful of people stopped him for photos in a downtown St. Paul parking lot.

For the most part, he’s generally happy to oblige fans — just don’t ask to drive it. The answer is probably going to be “No.”

“It’s a car that, love it or hate it, everybody smiles when they see it,” he said. “It always brings out a good memory to them or seems to. … It makes me feel good that the car is so well-received.”

Today, to mark Back to the Future Day, Haga is spending his day at several “BTTF”-themed events. He and his DeLorean will be at Best Buy headquarters for the Blu-ray release celebrating the film franchise’s 30th anniversary. He’ll also be at a comic book store in New Hope. And later this evening, the DeLoreans of Minnesota Club might crash a showing of “Back to the Future Part II” at a local movie theater — some are showing the film in honor of the big day.

Haga said it’s surreal that Oct. 21, 2015, has finally arrived, though he’s also a little sad the day that so many have been waiting for will soon be a thing of the past.

“Thursday will be a new day for us DeLorean owners and ‘Back to the Future’ enthusiasts.”