Gerald Wayne “Jerry” Leland, 90, of Bricelyn died Tuesday, Oct. 6, 2015, at St. Marys Hospital in Rochester. A funeral service will be at 11 a.m. Monday at Bricelyn Lutheran Church. The Rev. Nancy Dreier will officiate. Visitation will be from 2 to 4 p.m. today at Bruss-Heitner Funeral Home in Bricelyn and will continue one hour prior to the service at the church on Monday. Interment will be at Bricelyn Lutheran Cemetery. Military honors will be accorded by Bricelyn American Legion Post No. 165. Bruss-Heitner Funeral Home in Bricelyn is handling the arrangements. To leave an online condolence visit www.brussheitner.com. 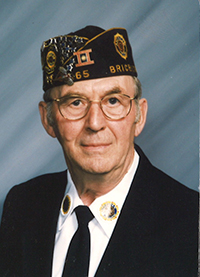 Gerald was born Dec. 22, 1924, in Bricelyn, the son of John and Josephine (Johnson) Leland. Jerry graduated from Bricelyn High School and then honorably served in the United States Army. After returning home Jerry farmed for a number of years.

He was united in marriage to Adeline E. Schulte on Feb. 26, 1955. For 25 years he was the Bricelyn postmaster. He was a member of Bricelyn Lutheran Church, Community Club, Sportsman’s Club and Bricelyn American Legion Post No. 165, where he won the Minnesota State Award for Volunteerism. He served as treasurer of the Bricelyn Lutheran Cemetery board, and was a volunteer member of the Bricelyn Fire Department. Jerry enjoyed deer hunting, fishing and being in the outdoors. He loved spending time with his family.

He is preceded in death by his parents; seven brothers, Hobert, Edgar, Irving, Leon, Orlando, Alan and Wallace; and four sisters, Viola, Marion, Mildred and Gladys.