Funeral services for Glenn Erickson, 90, of Emmons will be at 10:30 a.m. Monday at Concordia Bear Lake Lutheran Church. The Rev. Daphne Hamborg will officiate. Visitation will be from 4 to 7 p.m. today at Bonnerup Funeral Service in Albert Lea and one hour prior to the service at church. Burial will be at the church cemetery following the service. Glenn died Thursday evening, Oct. 15, 2015, at St. John’s Lutheran Community. He was recuperating from a broken hip. 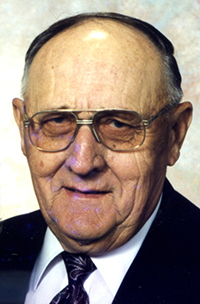 Glenn Maynard Erickson was born May 6, 1925, at home to Henry and Gunhild (Moe) Erickson in Worth County, Iowa. He was the youngest of eight children. He was baptized May 31, 1925, and confirmed May 26,1940, at Emmons Lutheran Church. He attended Lake Mills School and graduated from high school on May 21, 1943.

On Aug. 30, 1945, Glenn enlisted into the Army and was stationed in Alaska. After serving his tour of duty he returned home.

On Oct. 24, 1948, he married Arlene Mattson at Concordia Bear Lake Lutheran Church. They were married 52 years and were blessed with two sons, Wayne and Ron. Glenn was a farmer all of his life. He served on the Conger Creamery Board, Bear Lake Church Council and was Lutheran Brotherhood Church coordinator. Glenn and Arlene traveled all over with their good friends Frank and Ruby Doppelhammer. They were Texas snow birds for over 30 years. After his wife died in 2000, Glenn found companionship with Yvonne Enser.