Gyrocopter enthusiasts share their passion for aviation with others 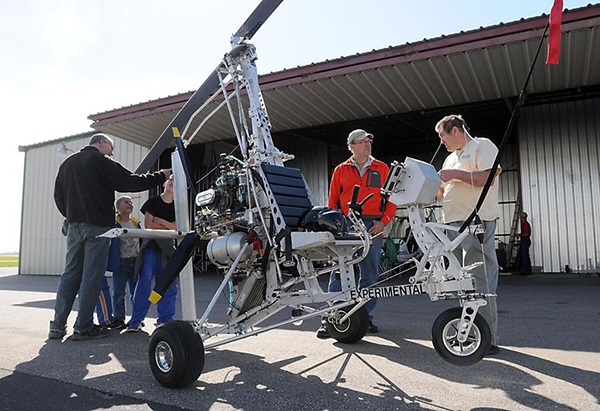 MANKATO — They look like mini helicopters but gyrocopters have some key differences.

“The engine pushes it forward and the rotor is driven by the wind, there’s no motor on it,” said Tom Patterson, of MN Gyronauts. “They’re a simple machine. Easy to fly.” 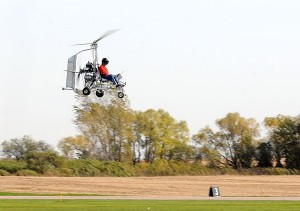 Denis Schoemaker brings his gyrocopter in for a landing at Mankato Regional Airport in Mankato. – Pat Christman/Mankato Free Press

Gyrocopter enthusiasts were on hand at the Mankato Airport Saturday to share their passion with the public.

Denis Schoemaker grew up and still lives next to the Mankato Airport and was fascinated with flight as a kid, watching the planes take off and land. Later in life he almost finished his pilot license training but decided it was too expensive to pursue. Then he found out about gyroplanes a few years ago and has been hooked ever since.

“I’d never want to fly a fixed wing plane now. It’d be boring, like riding in a mini van. This is like riding a jet ski.”

Patterson, too, has always been fascinated with flying, but he said flying planes is expensive and he couldn’t get a license anyway because of a health issue. The smallest gyros don’t require a license to fly, but a sports pilot license — something Patterson is working toward — is needed if you want to carry a passenger.

“There are no factory-made gyroplanes in the U.S., you have to build them,” he said. “There are plans on the Internet and you can build it and there are several kit makers where you can buy and build them.”

The three men share a hangar at the airport to store their five machines.

Supporters of gyros — called gyroplanes, gyrocopters or rotaplanes — say they cannot stall or spin out and are thus inherently safer than fixed-wing ultra-lights.

The three men said the fact the rotors keep automatically spinning if there’s engine or some other failure means they can still be landed safely.

Patterson and Schoemaker have had experience in doing just that.

“I’ve had numerous unexpected landings, but never had any problem. You land smooth,” Schoemaker said.

In fact, he learned about unexpected landings on his first solo flight. “I was up and the engine started sputtering. I went around to find a good place to land and I was right over my place and landed on my driveway and pulled it into the shop,” said Schoemaker, who owns Prairie Automation, located next to the airport.

Patterson last spring was flying his two-seater when the crank shaft broke and he lost thrust. Last month in his single-seater he lost power. Both times he landed, smoothly he said, in corn fields.

“You put the nose down to keep flying fast enough, then when you land you pull up,” Patterson said. “It comes down with a soft landing, no problem. It’s very forgiving.”

They said they try to avoid larger groves and fly in more open areas where a quick landing spot is easier to find if needed.

According to “Popular Mechanics,” Eindhoven University of Technology in the Netherlands analyzed 20 years of gyroplane crash statistics and determined, “There was nothing to indicate that gyroplanes are particularly dangerous, as long as you follow the rules.”

Louis bought his first gyro off eBay 10 years ago and later added another one. He said he likes that he can maintain them himself.

“We’re all motor heads — these are perfect for us,” he said.

They said the length of training to fly the gyroplanes varies depending on the individual. Louis took his training at a company that makes the kits in Texas, spending 15 hours over three days until he felt comfortable flying alone. They often train in two seaters, with the trainer guiding them, before going up solo.