Funeral services for Hazel Juliet Bennett will be at 2 p.m. Tuesday at First Lutheran Church in Albert Lea. The Rev. John Holt will officiate. Visitation will be from noon to the start of the service at church. Interment will be in Hillcrest Cemetery in Albert Lea. 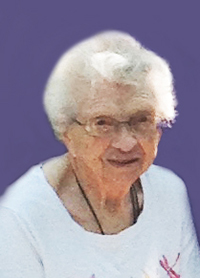 Hazel was born June 19, 1921, on a farm near Glenville to Edward and Mary Dell (Thompson) Ingamells. She was one of five children.

On Oct. 22, 1939, Hazel married Boyd J. Willis Bennett. To this union three children were born, Larry J., James Walter and Sandra Kay. They enjoyed camping, fishing and traveling. Some of Hazel’s favorite trips with Boyd included a trip to Disneyland in California, the World Fair at Montreal, and Niagara Falls. After Boyd’s passing in 1984, Hazel still continued her travels and went to Disney World, the Bahamas, International Peace Garden in North Dakota, Canada, Hawaii and Washington.

Hazel was involved in the Salvation Army ladies home league for over 20 years. She left the Albert Lea area to be closer to her daughter and son-in-law, who took care of her in Kilkenny.