Memorial services for Hilliard Blanchard Thompson, 92, of Emmons will be at 1:30 p.m. Thursday at Silver Lake Lutheran Church. The Rev. Randy Baldwin will officiate. Interment will be at Silver Lake Cemetery. Visitation will be from 4 to 6 p.m. Wednesday at Bayview/Freeborn Funeral Home and one hour prior to the service at the church. Online condolences are welcome at www.bayviewfuneral.com. 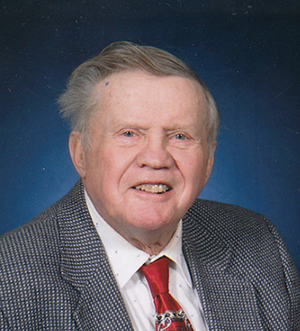 Hilliard Blanchard Thompson was born Aug. 10, 1923, on the Thompson farm home in Nunda Township that was built by his grandfather. He was the son of Henry Ingvald and Betsy Luella (Holstad) Thompson. He was baptized and confirmed at Silver Lake Lutheran Church. Hilliard attended rural school No. 105 until the eighth grade and graduated from Emmons High School in 1941. On March 11, 1945, Hilliard was united in marriage to Ruth Elizabeth Johnson at Glenville Parsonage. In 1956 Hilliard lost his right hand in a corn picker accident. He was a farmer for all of his life and also worked for 10 years as a forklift driver at Streater. After he retired from Streater, Hilliard enjoyed woodworking. He made something for everyone in his family. He loved farming and was always checking out fields as he and Ruth drove by them.

The Thompson family would like to thank hospice for the wonderful care they provided.

In lieu of flowers memorials are preferred to hospice.