Hollandale’s 3 in 1 finds success in diversifying 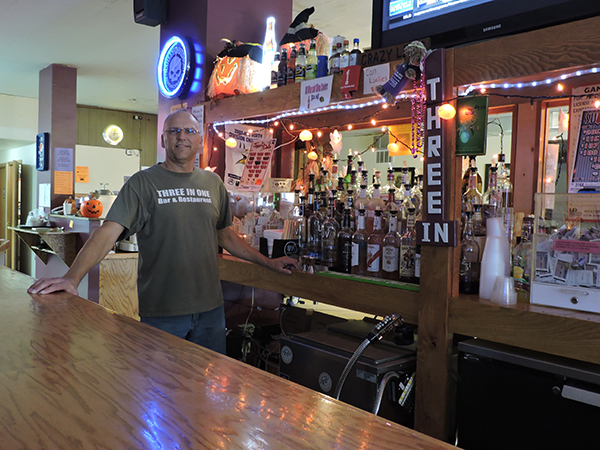 HOLLANDALE — Finding success in a small town can be a challenge, which is one reason Hollandale 3 in 1 Bar and Restaurant owner Dale Miller of Geneva found it necessary to serve more than one need in his community.

Miller said it was about six years ago after working at highly successful bars in the town of Geneva that he decided that if he was going to work that hard, he might as well work for himself. The question of where to set up his business didn’t take too long to answer. He remembered back when Hollandale had a thriving downtown; however, in more recent years the town’s restaurants, bars and gas station had all been closed for more than a year.

Miller’s formula for success was simple: Combine three of the most important service needs of a community into one business. The Hollandale 3 in 1 now serves as Hollandale’s only bar, restaurant and gas station/convenience store.

He described the scene downtown as being much different than it was when he first opened. He said Hollandale’s main street has went from looking like a ghost town to having people jokingly complain about how far away they had to park.

From his first day to today, residents continue to support 3 in 1 with their patronage whether they are a regular coffee drinker, frequent dinner or they enjoy the bar’s darts and pool leagues. In addition to these activities, Miller hosts events at his bar including a yearly Halloween costume contest.

He said parents typically bring their children in before or after trick or treating, and then the entertainment for the adults begin. Along with karaoke and a live disc jockey, there is a Halloween contest which awards prizes to the best costumes at midnight. In addition to the local crowd and patrons who regularly stop by from nearby communities, Miller noted he typically has a couple of buses of barhoppers who stop by and enjoy a few before heading to the next spot along their route.

Regular events also take place at the establishment. Thursday night is Taco Night. On Friday and Saturday nights there are alternating specials including fish, prime rib, steak and shrimp or barbecued ribs.