Funeral Services for Lois I. Orvick will be at 10:30 a.m. Wednesday at Bridge Community Church North in Albert Lea. The Rev. Clayton Balsley will officiate. Interment will be in Riverview Cemetery in Elmore. Visitation will be one hour before the service at the church. Bonnerup Funeral Service is assisting the family. 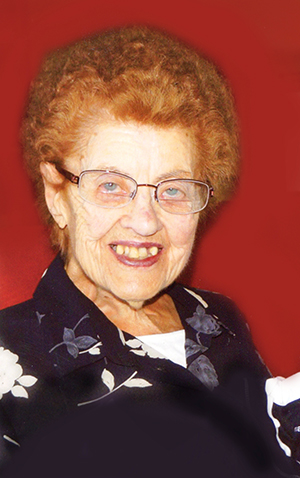 Lois attended several country schools in northwest Iowa, high school in Ida Grove, Iowa, and worked towards her Bachelor of Arts degree at Cedar Falls, Iowa, and later at Mankato State University. She was inspired by her schooling to become a teacher and taught elementary education in rural schools, Ledyard, Lakota, Iowa, and finished her teaching career teaching one on one with a child in the district. She would have been a proponent for year round school as she said the child would forget much of what he had learned over the summer and she would have to start over.

While teaching in Ledyard, she met John Orvick, a true farmer through and through. They married on Nov. 24, 1945, and had three daughters. They raised their family on a farm near Ledyard. Lois attended and was a member of Liberty Lutheran Church in Rake, Iowa. She taught Sunday school, Bible school and held various positions in ladies aid as well as taking turns giving the Bible lesson. She had a wealth of knowledge about the Bible and many enjoyed her lessons.

In their 60s, John and Lois retired to Bentonville, Arkansas, and kept busy on their acreage with their cattle, goats and chickens. As they aged they realized they should be closer to children so they moved to Eagle Grove, Iowa. It was hard to move into town being true farmers who loved being in the country. John died in 2006. Lois stayed in Eagle Grove for another year and a half before moving to Albert Lea in 2008. She was a member at Crossroads Church in Albert Lea, but has attended Bridge Community Church in recent years with her daughter, Marly, as she had to give up driving.

Lois was a quiet lady who enjoyed reading, gardening, sewing and quilting — donating many of her sewn items to charities.

She was preceded in death by her parents; brother, Donald, in World War II; and her husband, John.

Her family thanks her for the Christian values she has passed on to them. She taught them by example in her daily life. She will be missed by many. Blessed be her memory.

Memorials preferred to Lifebuilders International, where her granddaughter and family are  missionaries in Guatemala, the American Bible Society or to donor’s preference.