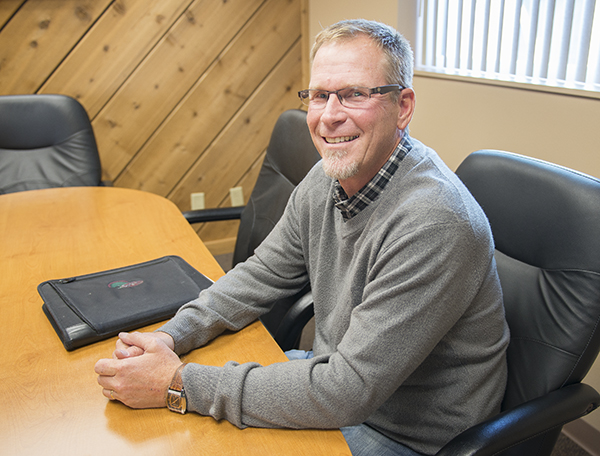 Jim Esson, 52, is the support services/production manager at Cedar Valley Services, an organization that provides services to people with physical and mental disabilities and to commerce and industry.

Esson, who has been in the position for about seven to eight months, helps people with physical and mental disabilities obtain employment in the community or work in the organization’s on-site plant. He sets up contracts with outside manufacturing companies for work and contracts for the organization’s cleaning crew.

Esson is a Belle Plaine native. He graduated from Minnesota State University, Mankato with a degree in business and later worked in the food service industry for 27 years for different foodservice companies in Minnesota, Ohio and Missouri.

He drew part of his inspiration to enter the field from spending summers with a disabled nephew.

“Being with him gave me a good experience, and seeing how he progressed and how day programs helped was a major inspiration,” Esson said. “And then I learned more through my daughter. I hit 50 and I decided I had to do something different, that I had to give some more back.”

His daughter oversees people with disabilities at her job in the Twin Cities.

Esson’s goal in his position is to get eligible clients work in the community.

“My goal is to educate employers on why these people can be awesome workers,” he said. “They won’t quit, and they’ll give them their all each day.”

Esson said although the job keeps him busy, there are times when he can see the reward of his job.

“There’s days when I’m tired, but if you’re spending time with the people you are working for, life’s not that bad,” he said.

“Not all of us wake up excited to go to work,” he said. “But when you walk in and see people who are very positive, it makes it worth it.”

“I definitely did the right thing,” he said.

In his spare time, Esson enjoys camping, riding motorcycles, being outside and watching the Minnesota Vikings.

Family: wife, Shari, 52, a registered nurse; son, Afton, 27, a library archive manager at the Goodhue County Historical Society; and daughter, Mackenzie, 25, who oversees people with disabilities at her job.

Interesting fact: He enjoys riding motorcycles and is an avid Minnesota Vikings fan.

The city has two options for the former meatpacking plant now known as the Blazing Star Landing. – Provided The... read more