A funeral service will be at 11 a.m. Friday at United Methodist Church, 1000 First Ave. N in Northwood. The Rev. Shirley Hoffmann will officiate. Burial will be in Sunset Rest Cemetery in Northwood. Visitation will be one hour prior to service time on Friday at the church. 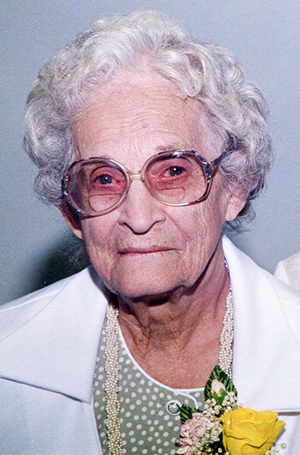 Those wishing to give a memorial in Margaret’s memory may wish to consider memorials to Lutheran Retirement Home or to United Methodist Church in Northwood.

Conner Colonial Chapel, 1008 First Ave. S in Northwood, is in charge of the arrangements.

Margaret Arlene Godfrey was born on June 8, 1913, in Gilman, Iowa, the daughter of Henry and Minnie (Conger) Nielandt. She was baptized and reaffirmed the faith of her baptism through confirmation in the Methodist faith. She attended Northwood Community Schools, graduating from Northwood High School. She was united in marriage to Orble Godfrey on Dec. 8, 1935, in Northwood. Orble preceded her in death in 1994.

Margaret will be remembered for her green thumb, her vegetable and flower garden, handy work, quilting, sewing and baking bread.