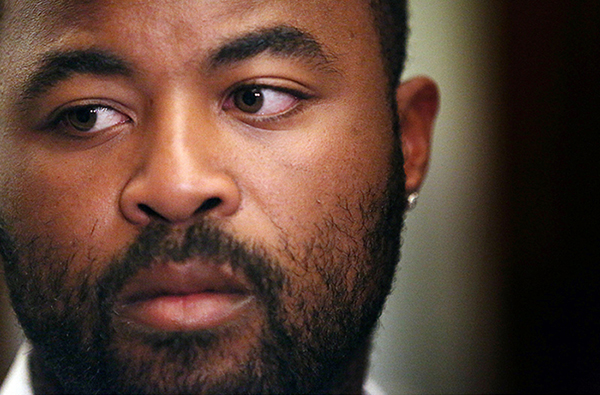 Rashad Turner doesn’t want your sympathy. He doesn’t want to be your friend. He doesn’t care if you like him. Turner says black Minnesota deserves more than it gets, and he’s going to change that by getting in the way every chance he can.

Turner, 30, has drawn hundreds of people to Black Lives Matter protests to try to make that happen. And along the way, he’s generated controversy and, in some cases, provoked a withering backlash.

And he’s not done.

“I do think that we need to continue to force the issue, and if that means shutting down every event that comes to St. Paul until we get that change, that’s what we’ll do,” he said.

Strictly speaking, Turner hasn’t actually shut down much: A march to the State Fair was stopped at the gates; when protesters stopped trains on University Avenue, buses carried passengers along the line. And St. Paul officials persuaded him Thursday to back off from a threat to block the Twin Cities Marathon.

Still, Turner has a keen insight into just where to take a stand to draw Minnesota’s attention to issues of racial inequality. He grew up with it.

Turner had a rough start. He was born the son of two St. Paul teenagers. His dad, Leslie Simmons, was shot and killed in a street argument when Turner was a toddler in 1986. Simmons was just 19.

“At that time my mom was 16, 17, and just sort of couldn’t handle that tragedy, and had some kind of bumps in the road in her life, so my grandma ended up taking us in,” he said. “Thank God for that, because we were able to get the tools we needed to grow and find our gifts and strengths as kids.”

Turner said he grew up in Frogtown, and his grandmother steeped him in St. Paul.

He went to Capitol Hill, the city’s gifted and talented magnet school, through seventh grade. He played basketball at the Martin Luther King Rec Center, and Midway baseball at Dunning Field, all landmarks of St. Paul culture. His grandmother even got him to run for the junior Winter Carnival royalty, and he was picked to be King Frost in 1999.

“It was a good summer, a lot of carnivals,” he said. “You know I got that wave down pat.”

Turner said he’s even worked at the Minnesota State Fair, where he launched his first big protest just a month ago. He’s also led demonstrations at the governor’s mansion and won a two-hour audience with Mayor Chris Coleman Thursday. Turner has an intimate familiarity with white Minnesota and how it works.

And another thing he knows: cops.

Turner studied to become one, inspired by his father’s death and a high school internship at the St. Paul Police Department. He even graduated from Hamline University in 2008 with a degree in criminal justice.

But he says as he started real-world police skills training and applied for the Brooklyn Park force, he had a change of heart. He said it wasn’t the job he’d seen as an intern.

“I was able to get that inside look at the police department,” he said. “I was able to see a lot of good officers working, and that gave me a good image of what police, what policing should look like, but again, when I started the skills academy, I didn’t see that same image. The focus being so much on using force and deadly force just sort of turned me off to being a police officer.”

Instead, he got a job as a cultural liaison at the White Bear Lake school district and most recently a Scholars Program organizer with Century College. But his job was cut, and he’s been on unemployment as he’s worked to start the Black Lives Matter chapter in St. Paul.

But Turner’s experience with the criminal justice system hasn’t just been as a protester or prospective cop.

Turner says that isn’t relevant to what he’s trying to do now.

“I remember when a mug shot was posted on my Facebook page,” he said. “You know, I’ve made mistakes in my personal life. I think as a leader, trying to create this change, I will make mistakes. But none of my mistakes have been anything where, I would feel, that keeps me from having integrity in what I’m doing.”

And what exactly is that? Turner has a long list.

So far, though, police have been the focus of Turner’s public activism. He said they’re defenders of the existing order he’s trying to change.

Officers remain deeply suspicious about his motives, even as they have helped facilitate his marches and opted not to arrest protesters blocking traffic or trains.

Minnesota Police and Peace Officers Association president Paul Ford said in recent letter to more than 8,000 officers that Turner is part of what he calls “a war on law enforcement.” Ford doesn’t think it’s about justice.

“I think it’s more than that,” Ford said. “I think they’re inciting ill will against the entire community. It seems like the only black lives that matter are black lives that are involved in use of force situations with cops, and more often than not, they’re found to be justified. So there’s not a real problem that I see and I think most of the community sees, with police brutality. So I don’t know. It just seems like they’re trying to anger everybody. They’re trying to get attention.”

Turner admittedly doesn’t shy away from that attention. He speaks publicly through a bullhorn. He’s openly defied police orders and blocked streets. He’s also running for the St. Paul school board. He’s the subject of a stream of Internet invective and even death threats — threats he said he has to shrug off.

But even some of his allies are growing critical: At least one Black Lives Matter Minneapolis organizer denounced Turner’s plan to disrupt marathon runners, and former NAACP president Nathaniel Khaliq said before a meeting with Coleman Thursday that the marathon protest was threatening to backfire.

Nekima Levy-Pounds, a University of St. Thomas law professor and head of the Minneapolis NAACP, was with Turner at what both consider a turning point in his life: a March trip to Alabama for the 50th anniversary of Bloody Sunday. She said she was touched by his empathy and encouraged him to organize a Black Lives Matter chapter in St. Paul.

She doesn’t mind it has been apart from the organization in Minneapolis, more confrontational and even more uniquely Minnesotan.

“I think that the way that he operates is actually prophetic,” she said. “That he looks for that sacred ground and sacred territory, and those unique places that you don’t think that the movement would even be present. He goes there and says, ‘Yes, there is room here to have this discussion,’ and I think that’s what’s so jarring to people.”

Turner clearly hit a nerve with his latest plans, touching off a storm of debate about whether his message had a place at the event.

In the end, he earned a promise from the mayor to hear out the issues Black Lives Matter raised — but opted to step aside for another St. Paul tradition, the finish of the Twin Cities Marathon.