Mother, son find success in college thanks to scholarships 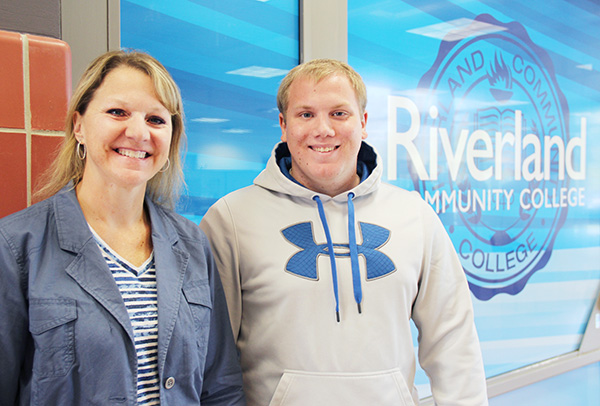 Amy Ferber and her son, Kellen, have both benefited from scholarships through Riverland Community College. – Sarah Stultz/Albert Lea Tribune

New Richland resident Amy Ferber and her son Kellen have seen first-hand the benefits of attending a community college in helping them achieve their career goals.

Amy Ferber said she used to have her own day care business in her home until one day she was diagnosed with breast cancer.

She went through treatment, including surgery, chemotherapy and radiation, and decided she didn’t know if she wanted to continue down the same path.

“I had always wanted to be a nurse,” she said.

She decided to go back to school and was grateful to receive scholarships to support her in her efforts. In total, she earned $5,400 in scholarship money.

“The scholarships, they made me feel like someone believed in me and what I was doing,” Amy Ferber said. “It wasn’t just monetary. It was, ‘Hey, we think you’re doing a good thing, and we’ll support you.’”

Some of her credits from a previous stint in college after high school were able to transfer, and she graduated in 2012. She now works as a registered nurse at the New Richland Care Center.

Steve Bowron, dean for institutional advancement at Riverland, said Ferber was one of the college’s top nursing students.

This legacy has continued with Kellen Ferber, who is presently attending the college.

The 20-year-old said he graduated from high school in 2014 and decided to attend Riverland Community College for his first two years of college to save money.

“I didn’t want to spend two years at a more expensive college getting the same credits,” he said.

Bowron said both scholarships are considered prestigious. The Dr. C. Jerry Nelson Presidential Enhanced Scholarship provides funding for four semesters as long as he continues his studies at Riverland and maintains a strong GPA.

Kellen Ferber said though he still has to pay a portion of his tuition, the scholarships have made his costs more manageable.

“I still have to pay some out-of-pocket, but it’s manageable enough I don’t have to take out any loans,” he said.

He also is part of a work-study program that he earns money from. He lives at home with his parents and saves on the cost of rent.

He said when people question his decision to attend Riverland, he reminds them that he is receiving the same education he would at a larger college — just in a more affordable way.

“It’s the same books, the same information, the same courses,” he said.

He plans to transfer to the University of Minnesota in Duluth after completing his generals at Riverland to pursue a degree in industrial engineering.

Bowron said there are more than 150 sponsored scholarships presently with the college foundation, many of which give out multiple awards.

While the total value of scholarships awarded has multiplied in the last five years, Bowron said they are still in high need of additional scholarship sponsors. More than 100 eligible students are being turned away each semester because of a lack of available funds.

There were 513 scholarships awarded to Riverland students with a total value of about $471,000 in fiscal year 2015