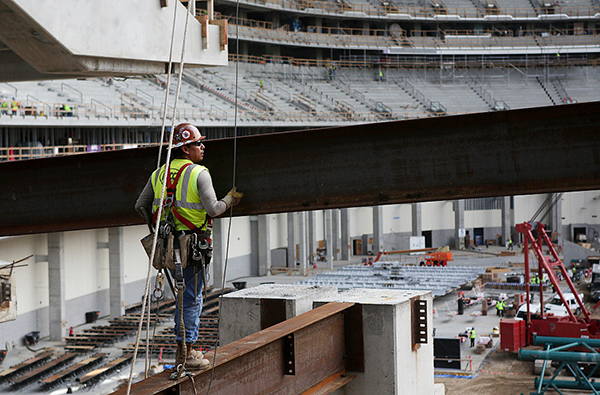 MINNEAPOLIS — There are a lot of superlatives about the U.S. Bank stadium under construction in Minneapolis. It’s the biggest public works project in state history. It is twice as big as the Metrodome. It cost more than the NASA probe to Pluto.

But no stadium statistic may have initially seemed more implausible than this one: 32. That’s the percentage of the construction workforce the state wanted to be minorities.

“We thought it was a very ambitious goal. And we frankly were concerned about just how achievable it was,” said John Wood, vice president at Mortenson Construction, the company building the stadium.

The test of that goal has come this summer with as many as 1,400 workers on site some days. Back when the work started, no one was even sure there were enough minority construction workers in the state to make up a work force like that.

The Minnesota Sports Facilities Authority even hired a north Minneapolis trade school, Summit Academy, to help build the workforce from scratch if necessary, with the most basic skills training.

But 22 months after breaking ground, nearly two in five workers on the project are minorities. Nearly one in 10 are women. That’s even higher than the goal set three years ago.

“Against a 32 percent goal, we’re sitting at 37 percent minority,” said Alex Tittle, equity director for the Minnesota Stadium Facilities Authority. “Women, we are at 9 percent, against a 6 percent goal.”

Tittle said the project is meeting its goals through recruiting and targeted training programs. Tittle tracks the workforce on practically a daily basis to give feedback to Mortenson and its subcontractors. The effort has removed “all and every potential obstacle and excuse from anybody who has created an obstacle for minorities, veterans, women alike to get into the construction industry.”

Critics of the company’s previous projects, like Target Field, claimed that contractors were padding their payrolls with black and other minority workers in non-essential jobs, just to make the hiring goals set out in their construction contracts, which Mortenson said isn’t true.

That isn’t even possible now, when so many of the construction crew are minority workers, said Lynn Littlejohn, director of community affairs for Mortenson.

“There’s nobody sitting on a bucket,” Littlejohn said. “There’s nobody just out here holding a sign or whatever. They’re all doing the work that needs to be done, in every discipline and every trade, to build this stadium.”

State Human Rights Commissioner Kevin Lindsey said the goals are not just about being inclusive. He said tapping into all the state’s workers is the only way to hire enough workers to keep Minnesota’s construction industry going as Minnesota’s demographics shift.

The construction industry agrees. Mortenson’s Wood said Mortenson simply has to factor diversity into its work to get the projects done.

“What has been the pipeline of traditional construction workers in this business — whether its second and third generation tradespeople, or here in Minnesota, young men and women that were coming off the farms, particularly young men — that traditional source of workers isn’t the same as it was 30 years ago,” Wood said.

The supply side of the labor market is feeling the change, too.

Ironworkers Local 512 represents heavy construction workers in parts of three states including Minnesota and had members working on the stadium. The local has a training center in St. Paul and just spent $4 million to expand it.

In the last five years, the apprentice classes there have regularly topped 25 percent for minorities, according to Barry Davies, the union’s business manager. He said the local has had to adapt to changing demographics to fill its ranks, including looking for iron workers at church.

“We just kind of changed the way we were recruiting,” Davies said. “We used to do schools and different job fairs and stuff. We reached out to different groups, like the Progressive Baptist Church in St. Paul. We had a couple job fairs there. We worked with the Urban League.”

Advocates hope the equity goals will make the stadium will be more than just a job for many.

Records from the stadium authority and Mortenson show the stadium had pumped more than $1.5 million in payroll into north Minneapolis alone, an area with some of the state’s highest unemployment.

Construction workers are already leveraging their stadium experience to get work on other projects, like the new Wells Fargo offices in Minneapolis and Amazon’s new Minnesota distribution center in Shakopee.

Robert Johnson lives in Crystal and said he’s a living example of the phenomenon. He started out years ago as a low-level laborer and worked on projects like water treatment plants. Now he’s 53, a carpenter, and among the hundreds of African-Americans and other minorities clocking into work on U.S. Bank Stadium.

And proud of it.

“I did footings, I did walls. Right now, I’m up in the snow catch,” he said during a visit to the site. “See all these big gray beams that holds the precast? I had to enclose all that with poly. It was a very challenging job.”

But it’s getting done, and with help from people like him, so is a change to Minnesota and the way stadiums are being built.