Funeral services for Norma Stoneking, 90, of Albert Lea will be at 10:30 a.m. Tuesday at Faith Baptist Church. The Rev. Dennis Seiler will officiate. Burial will be at Graceland Cemetery.  Friends may greet the family one hour prior to the services at the church. Online condolences are welcome at  www.bayviewfuneral.com. 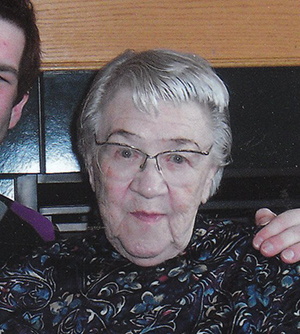 Norma Stoneking was born in Faribault County, the daughter of Rollie B. and Alice (Peterson) Centers. She was the youngest of three children. She attended school in Delavan.

On Sept. 1, 1940, Norma was united in marriage to Donald Stoneking. She and Donald farmed a number of years before moving into Delavan. There she made pies for a local restaurant along with raising their three children. The couple moved to Easton in 1951 where they owned and operated a restaurant until 1961. Two more children were born making a total of five. In 1961, they moved to Albert Lea where they owned and operated ServiceMaster until their retirement. Norma also worked several years at Club 16 as a part time fry cook.

She and Donald loved to travel. They made many trips around the country including Alaska, Hawaii and the Caribbean. They made numerous trips to visit their children as well.

Norma was a hard worker and trained their children to work hard also. She was an avid cook and seamstress and did both jobs exceedingly well. Norma made clothes for her daughters and granddaughters for many years and tried to teach them how to cook and sew as well. She loved to be with her family; holidays were always special to her. She enjoyed playing cards, Yahtzee and was also a bowler for several years. She was a member of Faith Baptist Church where during her years served as church hostess and often led the crafts for Bible School.

Norma was preceded in death by her parents; siblings Alan and Gilbert; and her husband of 72 years, Donald Stoneking.