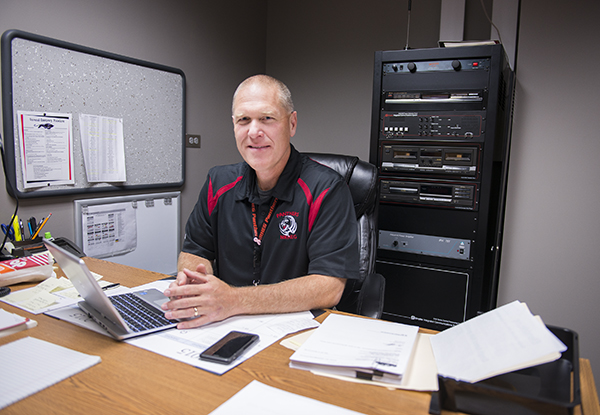 A greater sense of community was a major factor in bringing NRHEG’s new superintendent to town.

Carlson said he grew up in multiple places in Iowa before living and working in Wisconsin for the past 30 years. His wife, Sharon, and his teenage son, Thomas, still live in La Crosse. Carlson also has a son, Andrew, enrolled at Luther College in Decorah, Iowa. Carlson rents a house in New Richland during the week and spends his weekends back in La Crosse with his family.

While he spends a good amount of his spare time with his family, Carlson said he also enjoys exercising and community service, and is active in his family’s church. He said he’s always looking for ways to provide service in his community, and he’s interested in seeing how he can help the NRHEG community, as well.

This is Carlson’s 31st year working in education. He considers teaching to be one of the most important professions, and said it’s “the best career one could have.”

Carlson’s parents instilled in him the importance of service and helping others, he said. He thought teaching and coaching would be fun, and through that Carlson realized he had an opportunity to have an impact on the future.

“(The future) begins with students and children,” he said.

To Carlson, the main objectives behind being an educator are to incorporate strategic planning and the best workforce plan possible for a student.

“It’s all about how we can provide students with high-quality learning,” he said. “The level of commitment and passion for learning is very high.”

One of Carlson’s favorite things about the NRHEG school district so far is its sense of community. His district in Holmen was one of about 4,000 students, and NRHEG’s is less than 1,000. Carlson had worked at even larger schools prior to Holmen and said he had been looking for a smaller district with closer connections within the community. He believes he has found that within the NRHEG district.

“The school district is really the hub of what makes the community,” he said. “It’s really what I’ve been looking for.”

Address: New Richland during the week; La Crosse, Wisconsin, on the weekends